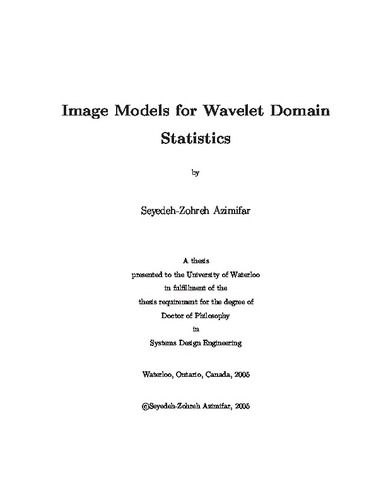 Statistical models for the joint statistics of image pixels are of central importance in many image processing applications. However the high dimensionality stemming from large problem size and the long-range spatial interactions make statistical image modeling particularly challenging. Commonly this modeling is simplified by a change of basis, mostly using a wavelet transform. Indeed, the wavelet transform has widely been used as an approximate whitener of statistical time series. It has, however, long been recognized that the wavelet coefficients are neither Gaussian, in terms of the marginal statistics, nor white, in terms of the joint statistics. The question of wavelet joint models is complicated and admits for possibilities, with statistical structures within subbands, across orientations, and scales. Although a variety of joint models have been proposed and tested, few models appear to be directly based on empirical studies of wavelet coefficient cross-statistics. Rather, they are based on intuitive or heuristic notions of wavelet neighborhood structures. Without an examination of the underlying statistics, such heuristic approaches necessarily leave unanswered questions of neighborhood sufficiency and necessity. This thesis presents an empirical study of joint wavelet statistics for textures and other imagery including dependencies across scale, space, and orientation. There is a growing realization that modeling wavelet coefficients as independent, or at best correlated only across scales, may be a poor assumption. While recent developments in wavelet-domain Hidden Markov Models (notably HMT-3S) account for within-scale dependencies, we find that wavelet spatial statistics are strongly orientation dependent, structures which are surprisingly not considered by state-of-the-art wavelet modeling techniques. To demonstrate the effectiveness of the studied wavelet correlation models a novel non-linear correlated empirical Bayesian shrinkage algorithm based on the wavelet joint statistics is proposed. In comparison with popular nonlinear shrinkage algorithms, it improves the denoising results.