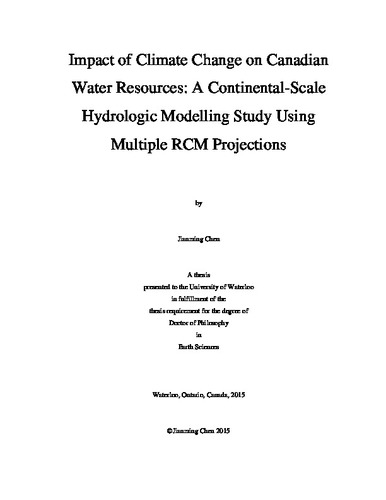 Evidence of climate change is mounting and there is nowadays an increasing international scientific consensus that current climate change is, in part, induced by anthropogenic emissions of greenhouse gases. Climate change will have significant impacts on the water cycle and hence on both quantity and quality of our limited and valuable water resources. Quantifying the potential hydrologic responses to a range of plausible future climates is the key for assessing the linkage between future climate change and water resources. There have been a large number of hydrologic impact studies addressing this challenging issue in the literature. Most of the studies, however, bear one or more of the following deficiencies: 1) global-scale GCM data are directly used as the forcing for the hydrologic model; 2) Future climate projections are derived based on only one emission scenario; 3) Future climate projections are derived based on only one climate model; 4) The future climate scenario is hypothetical, e.g. based on an arbitrary assumed change factor relative to the present-day climate scenario, instead of using a climate model output; 5) The hydrologic model does not simulate both surface water and groundwater in a physically-based manner and 6) The model domain is too small, e.g. a catchment or river basin scale. In this study, a continental-scale modelling framework free of the above caveats is developed to predict the potential future climate change effects on Canadian water resources. To the best of my knowledge, this study is one of the first of its kind in the literature. HydroGeoSphere, a physically-based fully-coupled surface-subsurface flow and transport simulator, is selected to perform hydrologic modelling in this study. The study domain covers the Northern half of North America continent, consisting of six super watersheds. The study domain is discretized into a triangular mesh, with refinement along hydrologically important features. After discretization, the 3D prism grid has 15 vertical layers and about one million nodes. In total 11 hydrostratigraphic units are represented in the 3D geology model which is constructed based on sediment thickness, permafrost distribution and surficial geological data. In this work, net precipitation data are used as the forcing to drive the HydroGeoSphere model. Present-day net precipitation is computed using observed total precipitation data in conjunction with high-resolution RCM outputs. The hydrologic model is initially used to reproduce present-day hydrology and the simulation results show good agreement against observed hydrologic data. After calibration and validation, the HydroGeoSphere model is used to assess hydrologic impacts of future climate changes assuming that, except for net precipitation, all parameters and boundary conditions remain unchanged. Multiple high-resolution outputs obtained with three reputable RCMs (CRCM, HRM and WRF) under two IPCC emission scenarios (A2 and A1B) are used to estimate future net precipitation. This is determined based on the RCM projected changes between the future periods (2011-2040, 2041-2070 or 2071-2100) and the control period (1971-2000) using a hybrid approach. The long-term evolution of hydrologic responses to future climate changes over the 21st century is explored using three 30-year-period CRCM data. Efforts are also made to quantify the two main uncertainties in simulation results that are associated with the climate models and the emission scenarios using four RCM outputs for the period of 2041-2070. Simulation results suggest that rivers in the North are likely to observe a steady increase in streamflow and streamflows of the major rivers in the South are predicted to remain more or less unchanged over the 21st century. The water table is predicted to rise in mountainous regions in the NW, decrease in the prairies and remain relatively unchanged for most of the remaining areas where the terrains are relatively flat. Sensitivity analyses indicate that the hydrologic responses are more sensitive to the different climate models than they are to the different emission scenarios. This modelling study demonstrates that a fully-coupled surface and subsurface flow hydrologic simulation at the continental-scale is possible and could be made operational. The good skill exhibited by the HydroGeoSphere model for the present-day hydrology simulation suggests that high-resolution RCM outputs are effective surrogate data for actual ET estimation when observed climate data are insufficiently available. Based on the RCM projections used in this work, future climate may have significant hydrologic impacts in some regions of this study domain such as in the North and the prairies. However, simulation results should be interpreted with cautions due to the inconsistencies and sometimes even opposite predictions between the outputs of different RCMs.