The City Under the City: in/to the PATH 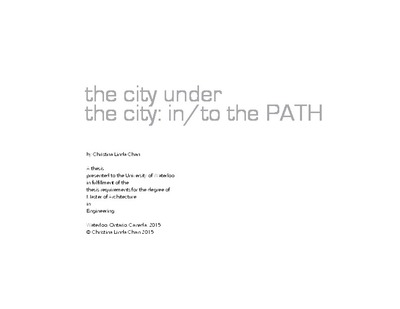 Beneath the congested sidewalks of downtown Toronto is an expanding underground pedestrian network spanning thirty kilometres, the largest urban infrastructure of its kind. Branded as the PATH, it does not provide a clear path to the major destinations it connects. It is a non-place; a labyrinth of shopping centres, each privately owned by competing developers with the intent to disorient and trap consumers within their property. Repeated efforts by the city to promote the PATH and allow it to be read as a single entity have been thwarted by the developers whose self-interests outweigh the importance of the larger network. Inconspicuous street entrances add to the problem, preventing the PATH from becoming a viable alternative to street level sidewalks during the harsh winter months, humid summer days and the odd thundershower. Daily commuters who have memorized specific routes remain the most prevalent user group while visitors from out of town struggle to find the Eaton Centre from Union Station. Accepting that the PATH is a collection of private spaces and not a public urban condition, this thesis explores the possibility of unifying its fragments with minimal architectural incisions that would surgically mend the system. Traversing the subterranean PATH would be facilitated by creating a permanent and legible navigation pattern within the tunnels, solving the problem of spatial orientation by intensely engaging the user’s direct experience through sensory-based design. Surface pavilions would provide visible access points from street level while protrusions from the underground would open up the PATH to natural light. The goal of these strategic alterations is to achieve effective utilization of the PATH by a full spectrum of people, easing the pedestrian traffic flow through the downtown core.