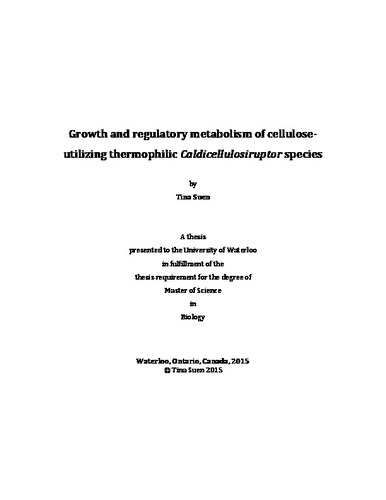 Hydrogen biofuels have been proposed as an environmentally-friendly and renewable energy substitute for petroleum-based fossil fuels. One species of bacteria capable of degrading cellulosic materials and producing vast amounts of hydrogen is Caldicellulosiruptor saccharolyticus. This species is one of the more well-studied thermophilic hydrogen producers as it can utilize a broad range of substrates and produce near theoretical maximum amounts of hydrogen by dark fermentation. Another species, Caldicellulosiruptor kristjanssonii, had its genome recently published but there is limited research done on this bacterium. It is studied here because of its ability to withstand even higher temperatures than C. saccharolyticus. It was found that both organisms were able to utilize glucose, xylose, cellobiose, Avicel, CMC, switchgrass, and xylan as sole carbon sources, with the exception of C. kristjanssonii which could only grow on CMC with yeast extract supplementation. Yeast extract was also determined to decrease, if not eliminate, the lag phase of growth for both organisms though growth was possible without yeast extract with the supplementation of a vitamin solution. C. saccharolyticus grew the best on xylose with cell densities reaching 2.5 × 10^8 cells/mL while C. kristjanssonii grew the best on cellobiose, reaching cell densities of about 3.2 × 10^8 cells/mL. Growth was not hindered on modified media containing 2 g/L soluble sugars or 4 g/L insoluble polymers, but it did have a detrimental effect on the growth rate and hydrogen yields, although carbon balances were near 100%. Enzyme assays were performed to study the native cellulase activities of these organisms while only recombinant enzyme assays have been done previously. Greater exoglucanase, endoglucanase, and xylanase activity was observed in the supernatant portion of the cultures compared to the cell-free extracts, suggesting that cellulases are secreted into the extracellular environment. Generally, the cellulases had the highest specific activity with the corresponding growth substrate, but it is noteworthy that growth on Avicel induced the synthesis of xylanases in C. saccharolyticus. Proteomics and RNA-sequencing were done to confirm the expression of enzymes previously annotated in the genomes as well as to examine metabolic regulation when grown in different conditions. Remarkably, growth on glucose and xylan stimulated flagella production even though both organisms are reportedly non-motile. These flagellar proteins are thought to be associated with substrate attachment rather than motility. Moreover, many glycoside hydrolase proteins were upregulated according to the growth substrates the organisms were subjected to and several genes encoding ABC transporters (Csac_2504, Csac_2506, Csac_0681 and Calkr_2435) were found to have broad substrate specificities. Proteomic analyses revealed that xylose isomerases, an enzyme of the pentose phosphate pathway, were upregulated not only in growth conditions with pentose sugars, but also in cultures grown on hexose sugars. This finding indicates that the hexose sugars are being converted into fructose, facilitating a carbohydrate preference. Enzymes in the EMP pathway including phosphofructokinase (Csac_2441 and Calkr_1980) were upregulated when grown on glucose compared to other conditions, as expected. With these findings, the aim is to gain a better understanding of the metabolism of C. saccharolyticus and C. kristjanssonii in hopes of optimizing downstream processes in hydrogen production.