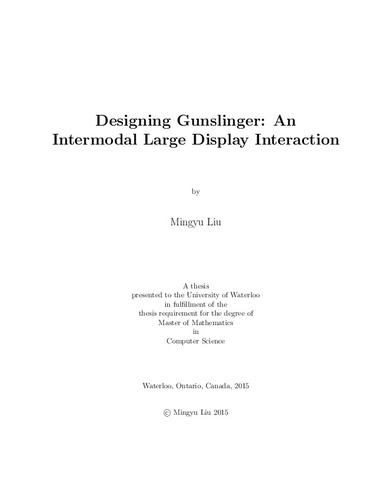 In this thesis, we introduce Gunslinger, a mid-air barehand interaction technique using hand postures to trigger command modes and small finger and hand movements for events and parameter control. Unlike past work, Gunslinger uses an 'arms down' body stance where both sets of fingers are tracked in mid-air with thigh-mounted sensors. This stance not only makes input more subtle and less fatiguing, but two-handed input and the reduced physical space needed to perform gestures makes it more compatible with large display touch input. The design of Gunslinger follows guidelines for relaxed barehand input that ensure that users can interact comfortably in mid-air without sacrificing the expressiveness of the interaction technique. We also provide continuous feedback about the hand sensing and posture recognition to ensure that the user never has to switch his visual attention to understanding the system's responses. An implemented interaction vocabulary is described for map navigation which demonstrates how Gunslinger can be combined with touch input supported by a touch hand inference method leveraging the arms-down form factor. And we show how this can be achieved with an input vocabulary that is equivalent, coherent, and compatible across mid-air and touch input modalities. We conducted a four-part study to evaluate Gunslinger for resilience to Midas Touch, posture recognition quality with hand cursor feedback, distant pointing and clicking performance, and general usability for Gunslinger alone and when mixed with touch input. We present the results of the study which show that Gunslinger has little Midas touch, reliable posture detection, good pointing throughput, and acceptable usability, even compared to faster touch input. In addition, we implemented and evaluated a rollback mechanism in order to address a stability issue arising from the study. Finally, we summarize our findings and describe extended studies to work on in the future.