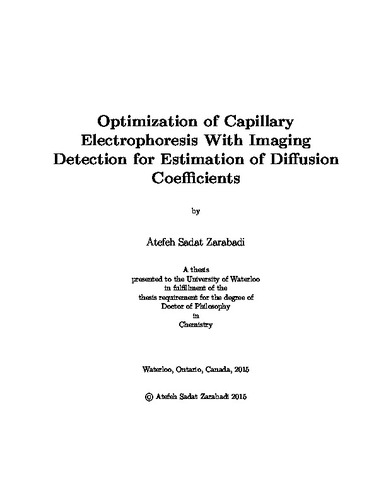 The diffusion coefficient, D, is an important physico-chemical property of the proteins. While it can be measured using various analytical techniques, capillary electrophoresis (CE) is widely used for this purpose. CE is particularly effective in combination with whole column imaging detection (WCID) technology has enabled the CE approach to measure the diffusion coefficient in shorter time. Thus far, however, WCID has rarely been used for monitoring diffusion processes. The purpose of this study was to optimize the application of capillary electrophoresis, coupled with imaging detection, to the problem of protein diffusion coefficient measurement. This optimization addressed both experimental and data analysis aspects of the method. For data analysis, we explored the use of Fourier transformation (FT), which offers a non-parametric, shape-independent evaluation of the raw data. FT was compared with two other common methods, both of which operate in the time domain and, unlike FT, operate in the time domain and make assumptions about the fundamental shape of the signal. As part of exploring FT data analysis, we performed simulations, in which parameters such as resolution and measurement time were systematically varied in order to find the optimal experimental conditions. Moreover, a new experimental approach is introduced for fast and simple measurement of diffusion coefficients, and which we refer to as imaging plug flow (iPF). This technique combines capillary electrophoresis, in which proteins are pre-concentrated under the membrane by electrokinetic injection, with a dynamic imaging detection. The concentration gradient detection method based on Schlieren optics is a universal, inexpensive, and efficient dynamic imaging technology for high-throughput moving boundary electrophoresis. A prototype multi-channel chip has been implemented for such measurements, and the effect of channel dimensions was investigated. The simultaneous measurement of the diffusion coefficients in the channels of this microfluidic device has improved the throughput of the experiment. The proposed approach addresses the limitation of single channel detection associated with UV whole column imaging detection. The implementation of a multi-channel CE chip, coupled with Schlieren imaging detection and an improved scheme for data analysis based on FT, provides a simple, fast, and high-throughput approach to the analysis of proteins diffusion coefficients.