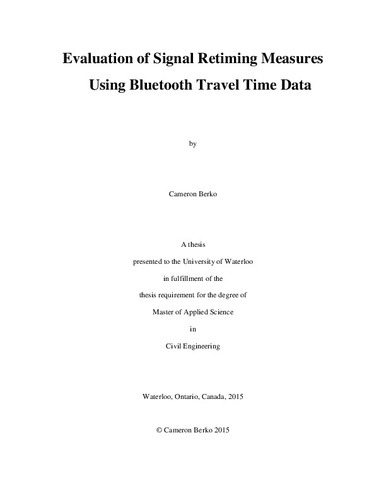 Signal retiming is an appealing strategy for improving network performance because it does not require the addition of new roadway capacity. The emergence of Bluetooth technology presents an alternative method of collecting travel time data to evaluate the implementation of signal retiming measures along an arterial corridor via a before-and-after study. As opposed to the industry standard of collecting a limited number of travel times via dedicated travel time runs using vehicles equipped with GPS data loggers, Bluetooth technology allows for a much greater number of travel times to be collected from a wider range of vehicles and drivers. However, the need persists for a practitioner-ready methodology that details how data collected in this manner should be used to evaluate signal retiming measures. This need formed the basis upon which this investigation was conducted. Both field and simulated arterial corridors were examined in this research. The field corridor consisted of a 15.1-kilometre long section of Victoria Park Avenue located in Toronto, Ontario that contained 37 signalized intersections. Seven Bluetooth detectors were deployed to collect data, meaning that the corridor was divided into six links. GPS probe runs were also available for comparison. The simulated corridor consisted of a 4.8-kilometre long section of Hespeler Road in Cambridge, Ontario that contained 12 signalized intersections. Three Bluetooth detectors were deployed to collect data, meaning that the corridor was divided into two links. GPS probe runs were also simulated. Bluetooth travel times were available at the path level (i.e. travel times of vehicles that traversed the entire length of the arterial corridor) and at the link level (i.e. travel times of vehicles that traversed only part of the corridor). To develop measures of effectiveness for evaluating signal retiming measures, the merits of each of these data sets for this purpose were first identified. Through statistical testing, it was found to be infeasible to use the travel times of vehicles that traversed the entire corridor for signal retiming evaluation due to the small number of travel times collected. Instead, a corridor should be subdivided into links through the placement of multiple Bluetooth detectors to increase the number of travel times collected. Next, recommendations regarding the characteristics of a signal retiming study were proposed. A regression model was developed using the field data to allow a practitioner to estimate the duration of the data collection period based on the characteristics of the corridor. Using the results produced by applying this regression model to the field data, recommendations were provided for the spacing of detectors. Next, measures of effectiveness to assess the impacts of signal retiming were developed. The recommended measures incorporated the difference in the means of the Before and After travel time data, the number of vehicles that traversed each link of the corridor, and statistical significance of the difference in the means. These measures provide a practitioner with an idea of the travel time savings or losses produced for the corridor, the degree to which these savings or losses were experienced by vehicles that traversed the corridor, and whether or not these savings or losses were statistically significant. The proposed measures were applied to both the field and simulated Bluetooth travel time data. These results were then compared to the results obtained by applying these measures to the GPS probe runs and to the true changes in travel time for the simulated corridor. Since one commonly cited weakness of Bluetooth travel time data is the presence of outliers in the measured travel times, the sensitivity of the proposed measure of effectiveness to the presence of outliers (i.e. travel times whose magnitudes were not representative of the traffic stream for which signal retiming was intended) was examined using the field Bluetooth travel time data. It was demonstrated that the developed measures are not significantly influenced by the presence of outliers. This investigation provides a practitioner with guidance on how to perform a before-and-after evaluation of a signal retiming study using Bluetooth travel time data. This investigation demonstrated that the division of an arterial corridor into smaller segments produces enough data to be able to statistically differentiate between travel times collected before and after signal retiming measures have been implemented. Guidance is also provided regarding the duration of the data collection period and how to divide the corridor into links through detector spacing. Finally, the developed measures of effectiveness provide concise evidence of the success or failure of signal retiming that a practitioner can present to stakeholders and policymakers with ease.