DE—FENCE: The Child and The City 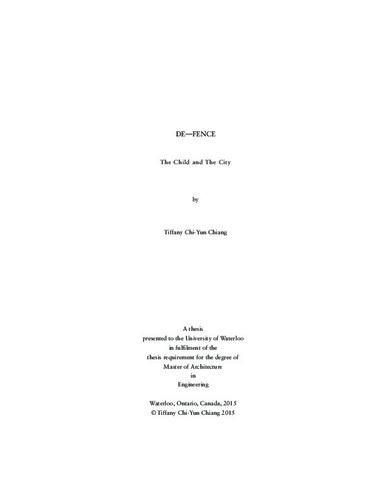 Every year, after the first heavy snowfall, the city blends together under a soft, white blanket. Curbs, carefully edged garden beds, sidewalks, and sewer grates are obscured and it appears as though no one has ever taken a step on a single square inch. Gradually, though, boot prints and tire tracks begin to redefine the city, their ingrained paths making the boundaries of busy roadways and private yards clear again. To be a very young child in the city, is perhaps a similar experience. The spatial boundaries that are so distinct for adults hold no charged significance for children who revel in exploration and for whom the city is still a blank canvas. Their naiveté only gradually gives way to a fear of unbounded space, reinforced by the cautions of their parents and societal authorities. Recognizing the ever increasing complexity of the environments in which children must develop and act, it is imperative that we find a means for understanding how they might be better accommodated. Children appropriate the streets differently than adults—they blur boundaries and test limits. This thesis challenges the strict delineation of the urban context to make room for children. In contrast to the rather rigid definition of a city typically held by adults, the thesis aims to offer a child- like vision of malleability and curiosity in an attempt to restore ownership of the city to children. Through photography, drawing, story-telling, and historical pedagogical research, along with the commented study of precedents from artists, architects, and other urban activists, the thesis offers a compilation of observations that promote a better integration of children in our cities. Rather than fencing in their creativity, we must strive to foster their inherent playfulness, removing the constraints that limit their spatial, temporal, and conceptual development.