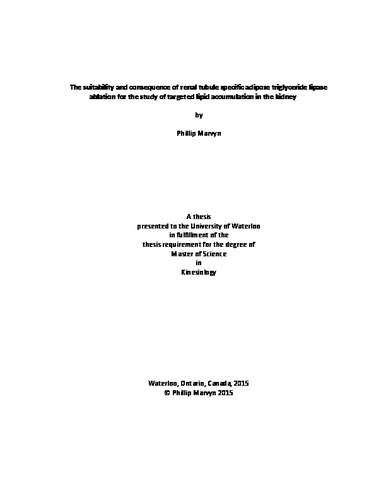 Circulating non-esterified fatty acids (NEFA) rise during fasting and are taken up by the kidneys, either directly from the plasma or during re-uptake of albumin from glomerular filtrate, and are stored as triacylglycerol (TAG). Subsequent utilization of stored fatty acids requires their hydrolytic release from cellular lipid droplets, but relatively little is known about renal lipolysis.We found that total [3H]triolein hydrolase activity of kidney lysates was significantly increased by 15% in the fasted state. Adipose triglyceride lipase (Atgl) and hormone-sensitive lipase (Hsl) mRNA expression was time-dependently increased by fasting, along with other fatty acid metabolism genes (Ppar_, Cd36, and Aox). ATGL and HSL protein levels were also significantly induced (by 239 ± 7% and 322 ± 8%, respectively). Concomitant with changes in total protein levels, there was an increase in ATGL phosphorylation at the AMPK regulated serine 406 site in the 14-3-3 binding motif, and an increase in HSL phosphorylation at serines 565 and 660 that are regulated by AMPK and PKA, respectively. Using immunofluorescence, we further demonstrate nearly ubiquitous expression of ATGL in the renal cortex with a concentration on the apical/lumenal surface of some cortical tubules. Our findings suggest a role for ATGL and HSL in kidney lipolysis.