Aqueous Stability and Transport of Catalytic Nanoparticles for Groundwater Remediation 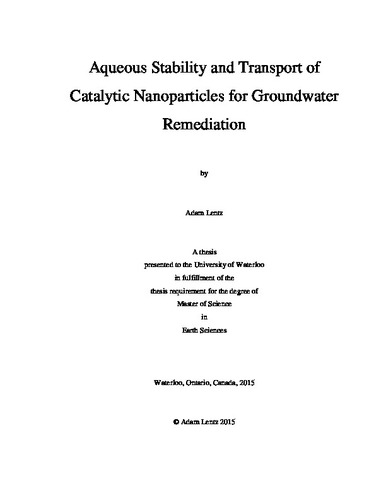 Nanoparticles (NP) are increasingly being used for in situ groundwater remediation because of their catalytic properties and the potential to inject them directly into the subsurface. Here, the aqueous stability and transport in porous media were evaluated for two types of NP: 1) catalytic and magnetically separable controlled superparamagnetic iron oxide NP aggregates (CSA) in 100, 240, and 340 nm diameter sizes and 2) palladium NP (Pd-NP) 5-50 nm in diameter. The Pd increases reaction rates, and the polymeric coatings (polyacrylamide on CSA and polyvinylpyrrolidone on Pd-NP) improve colloidal stability and transport. Investigations, under environmentally relevant conditions, into the longevity of Pd on the surface of CSA found that < 5 % of the Pd was released from the CSA over 4 months. Thus, sufficient Pd remained on the CSA surface to maintain catalysis during field-scale applications. To evaluate the aggregation and settling of NP, suspension tests were conducted in environmentally relevant NaCl, MgSO4, and CaCO3 solutions. The addition of Pd onto the surface of CSA did not lead to detectably altered NP stability. Increased settling of CSA was observed with increases in CSA size, ionic strength (IS), and ion charge. The lowest stability was observed for the 340 nm diameter CSA NP, with greater stability observed for the 240 nm, and the greatest for the 100 nm size. The greatest aggregation was observed for solutions containing CaCO3 (complete settling within 3 hr), followed by MgSO4; minimal aggregation was observed for the NaCl solutions and ultrapure water suspensions (minimal settling over 1-4 days, dependent on NP size). Decreased stability of larger NP (340 nm vs. 100 nm) suggests different mechanisms of settling and stability, relative to 10-100 nm NP reported elsewhere in the literature. The Pd-NP remained suspended for over a week in all solutions tested. The small size and the non-magnetic nature of the Pd-NP, rather than their surface charge, may have affected the stability relative to the 100-340 nm CSA. Column transport studies evaluated the mobility of NP in Ottawa silica sand porous media with a 0.7 mm mean diameter. The breakthrough test protocol was 5 pore volumes (PV) of NP suspension followed by 5 PV of elution with ultrapure water. The protocol for experiments with low mobility NP included input of a total of 20 PV: 5 PV of NP suspension, 5 PV of elution with the same solution, 5 PV of ultrapure water at the same flow rate, and 5 PV of ultrapure water input at a higher flow rate. Inverse modeling with the CXTFIT option of the STANMOD 1-D transport model was used to determine retardation of the NP and the % NP input concentration that eluted. There were strong linear correlations between fitted NP input concentration and the calculated % of NP eluted. Model results indicated conservative transport with ≈100 % elution, no retardation, and an attachment efficiency (α) = 0.0 for all NP transport experiments in ultrapure water. Minimal mobility (< 5 % elution, attachment efficiency α > 2.4) of CSA was observed after 20 cumulative pore volumes in 1.3 and 5.1 mM ionic strength (IS) CaCO3 solutions, except for the case of 100 nm CSA at 1.3 mM IS CaCO3 (85 % elution, α = 0.03). The Pd-NP were fully mobile in 1.3 mM IS CaCO3 solution. Calculated attachment efficiencies were above the theoretical threshold of 1, indicating that non-colloidal filtration theory attachment mechanisms, such as ripening, aggregation, or straining, controlled NP transport. Modest detachment was observed following both replacement of the CaCO3 input solution with ultrapure water and after increasing the flow rate. With a column test in 8.6 mM IS CaCl2 solution, minimal elution of NP was observed following 10 PV; however, complete detachment occurred when ultrapure water was flushed through the column. Reversible attachment of NP was observed in CaCl2 solutions, whereas irreversible attachment was observed in CaCO3 solutions. Synchrotron-based microtomography, a non-destructive imaging technique, which provides 3-D images of NP distribution on the pore-scale, both spatially and temporally, was used to evaluate Pd-NP transport. Tomography was used to collect images both above and below the Pd absorption-edge. Images collected below the absorption edge were subtracted from above-edge images to obtain absorption-difference images. Segmented and difference images were then multiplied together. These processes allowed for the determination of profiles of porosity, aqueous phase greyscale value, and silica phase greyscale value for each slice. Profiles of porosity enabled images to be lined up based on characteristic patterns for each column. With little variation in silica greyscale values from one image to another, aqueous phase attenuation values increased in the presence of the Pd-NP and decreased after the NP were flushed. The resolution was insufficient to image individual NP, but did allow for quantification of Pd-NP in a non-ideal silica-grain porous media. This study indicated that CSA and Pd-NP transport depends on the aqueous environment and NP size and stability. Pd NP could be viably transported through a CaCO3-rich aquifer to catalyze remediation reactions. The CSA could potentially be transported in CaCO3-free solutions in non-carbonate aquifers during in situ remediation applications. This study further validated the usefulness of tomography for transport studies of Pd-NP in silica grains.