Too Much Time, Or Too Little 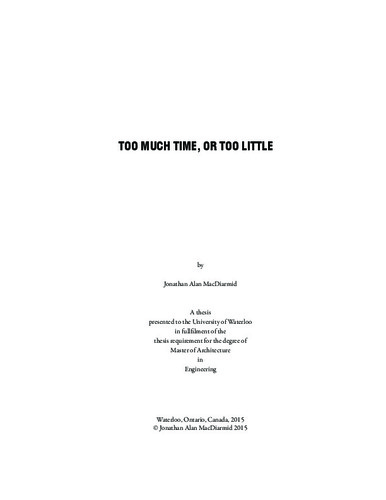 To Homo Faber (man as maker), the Promethean revolt against nature is an act of mastership. Guided by the ideals of utility and beauty, the world of making is always rooted in the transformation of means into ends. Human life is fragile; the objects we create give us durability. They reify what would otherwise be lost with every generation. They condition our existence. Like the table that both separates and unites, our experience of others is rooted in an in-between world of shared things. However, because we are never fully conditioned beings — that is, we are never fully for or against others — the world of things never entirely constitutes an end in itself. Homo Faber transforms means into ends, which can only ever, once again, become means. If this were not so, we would have built the ideal city, or reached the end of history. One shortfall of making is that it marshals reflection forward, into an idealized future where we make thoughts captive to their utilitarian ends, and deem the infinite newness of each person’s unique identity too haphazard. Just as the builder does not need others to accomplish his task, neither does the ruler need the opinion of his subjects to rule; we have replaced the uncertainty of plural action with the conviction inherent in pre-determined ideas. The line of inquiry follows Hannah Arendt’s political theory of the degradation of political space. Storytelling — as both subjective and structural critique — reflects on the mode of acting, as inherited from the tradition of making, and the potential harm it poses. It asks we think about what we are doing.