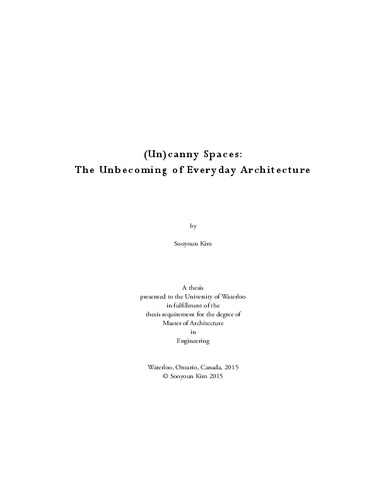 Beginning in the late eighteenth century, socioeconomic changes due to rapid urbanization defined a clear demarcation between public and private realms. In opposition to the chaotic milieu of the cities, the notion of home as a site of refuge was even more reinforced, propagating a cult of domesticity in the bourgeois society. Displaying excessive interior decorations and countless collections of personal objects, home has become an inwardly-constructed embodiment of one’s desires, memories and emotions. Not only a hideout from the external world but also an exposé of one’s repressed unconscious, home becomes simultaneously a place of the homely and the unhomely. The thesis investigates the phenomenology of the ambivalent nature of everyday architecture. Within banal landscape of familiar world, the unhomely emerges and subverts the preconceived notion of architectural space. What was once inextricably linked to one’s senses is now being questioned for its validity and reliability. The unhomely is not a physical setting located in a particular site, nor a mere stimulus eliciting certain emotions; rather, it is the process of re-contextualization of one’s intimate relationship with the world. This architectural phenomenon reveals the notion of death living in our existential temporality through the process in which the unconscious is projected onto the physical materiality of architecture. It is the fearful nature of everyday space which unbecomes itself, separating our bodily ego from the world of familiarity. The following work attempts to analyze the nature the un- of the [un]homely. This mechanism indicates that our everyday space is imbued with a precarious, yet, powerful energy of becoming that constantly transforms the familiar into the unfamiliar. In the space of the unhomely, we are haunted by our own emotions and imaginations which create a new kind of architectural experience beyond the domain of the corporeal.