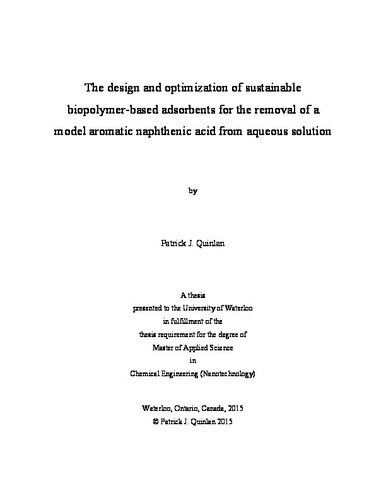 During the extraction of bitumen from the Alberta oil sands, a wide range of contaminants are concentrated in oil sands process-affected water (OSPW), among which is a family of organic carboxylic acids known collectively as naphthenic acids (NAs). NAs have shown to be both corrosive toward process equipment and acutely toxic toward a number of aquatic organisms. Therefore, for oil sands producers to either recycle OSPW or reintroduce it back into the environment, the concentration of NAs must be reduced to acceptable levels. Adsorption is one technique that has been investigated for their removal. This thesis reports on the removal of a model aromatic NA from aqueous solution using sustainable quaternized chitosan hydrogel adsorbents. Using optimized processing conditions to prepare the adsorbent material, an adsorption efficiency of 315 mg g-1 was observed. The kinetic and equilibrium adsorption characteristics were investigated by performing several batch adsorption experiments under a range of conditions. To improve the compressive strength of the hydrogel, cellulose nanocrystals (CNC) and quaternized cellulose nanocrystals (QCNC) were incorporated into the adsorbent formulation. Improvements in compressive strength of up to 179% were observed. However, this improvement was coupled with reductions in the efficiency of model NA adsorption. To the best of our knowledge, this work is one of very few studies to investigate the adsorption of NAs using polymeric resins and is the first to report the use of biopolymer based hydrogels and nanocomposite hydrogels for this application. When compared to other adsorbent materials reported in the literature, the adsorption efficiency of the presently reported material was on par if not superior.

Patrick J. Quinlan (2015). The design and optimization of sustainable biopolymer-based adsorbents for the removal of a model aromatic naphthenic acid from aqueous solution. UWSpace. http://hdl.handle.net/10012/9334