Stress-induced positive impacts of a predator on prey 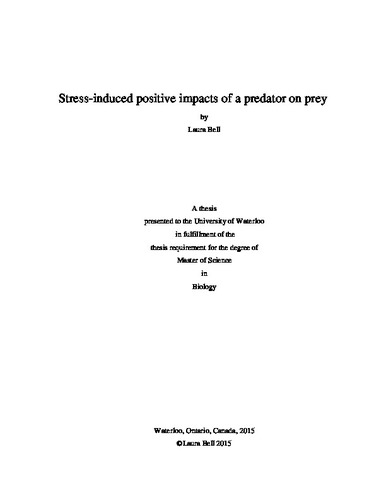 The stress-gradient hypothesis suggests that stress can determine the net sign or magnitude of the effect of one species on another. However, these ideas have not been well studied in the context of predator-prey dynamics where the predator positively impacts its prey, likely through ecosystem engineering. I used the pairwise species interaction between the burrowing nematode <i>Caenorhabditis remanei</i> and the bacteria that they consume, <i>Escherichia coli</i>, to determine if the net effect of the predator on its prey changed when stress was applied to the system. I measured the amount of bacteria in the presence or absence of predators in an environment that allowed engineering or did not allow engineering for two levels of stress. Colony plate counts of <i>E. coli</i> indicated that there was a stress-induced change in the net impact of nematodes on bacteria from neutral to positive, and that predator engineering in the form of burrows resulted in a larger amount of bacteria when stress was applied than when engineering did not occur. An indirect estimate of bacteria density using fluorescence thresholded by pixel brightness indicated that nematodes positively impacted bacteria whether stress was low or high. However, when stress was applied nematodes only benefitted bacteria if engineering occurred. Therefore I conclude that the net impact of a predator on a prey can change when stress is applied to the system and that ecosystem engineering is one mechanism through which this change can occur.