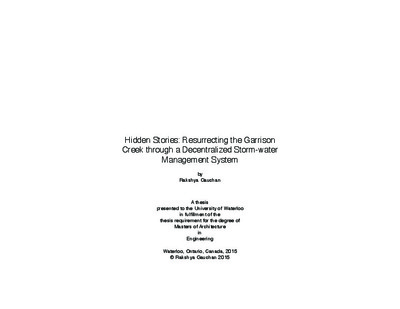 This thesis examines the disconnect that is created when the urban infrastructure of cities absorbs its historic landscape. Toronto’s Garrison Creek is a typical example of such disconnection; where the historic creek was buried as part of the storm-water infrastructure while the city expanded. The ravine system is one of the most distinctive features of the geography of Toronto. Although the creek has been buried since the 1880s, it is still not entirely hidden from the surface of the Toronto landscape; it can be heard while passing by a storm sewer, its shape can be seen in ravines and parks, curving streets, and the traces of buried bridges that lie along its course. However, the Creek’s lack of distinctive presence keeps up largely unknown expect to those who seek to find its traces. The proposed design presented in this thesis offers a community landscape development that seeks to enhance the connection between the city and its buried watershed through low-impact landscape infrastructure. Working with a decentralized storm-water system instead of a conventional centralized singular system, this study focuses on the integration of a hybrid technological and natural system. This integration aims to assist in the resiliency of the overall water management system, give the public a better understanding of natural systems, and ultimately providing protection from the impacts of extreme weather events. The design also aims to enrich the public space and reconnect with the historic water system, an element that has been hidden under the city, its presence unknown for over a century. The intervention highlights issues of water remediation and demonstrates a general strategy that could be adapted to other similar sites in the city.