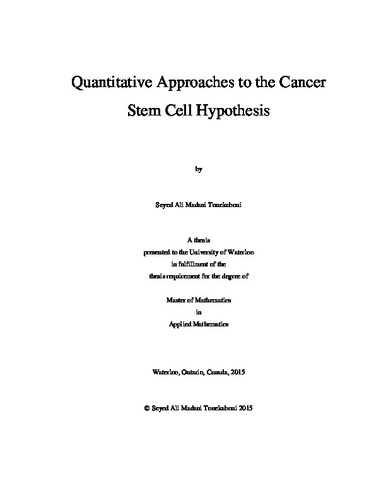 In this thesis, phenotype switching in cancer cell populations is modeled. We focus on the behavior of cells at the phenotypic level and present mathematical models to capture the results of available experiments. The models, based on the cancer stem cell hypothesis (in addition to the new concept of plasticity in tumor populations), are also employed to predict cancer cell growth in vitro and in vivo. The models are analyzed in the two limits of large and small cell numbers. We use stochastic analysis to capture the random behavior of cells in the limit of low number as observed in mammosphere formation assays (MFAs). Stochastic analysis is employed to estimate quantities such as survival rate while the deterministic solution of the models is obtained to simulate the average behavior of cells. The importance of stochastic analysis and deterministic simulations is discussed in detail. The primary purpose of the thesis is to highlight the importance of stochastic analysis in cancer stem cell experiments. The models are developed or modified based on the idea that both stochastic and deterministic behavior of cells should be considered simultaneously. In order to describe the behavior of the cells in cancer stem cell assays, the developed models are then used to investigate the possible experimental errors in the area and suggest possible filtration methods for corresponding experiments. In addition, the models are used to investigate the behavior of tumors under radiotherapy; and the effects of phenotype switching on the efficiency of therapies are investigated in the final part of the thesis.