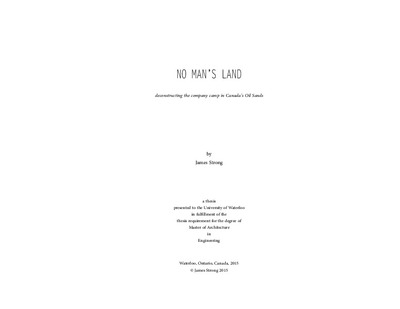 For nearly fifty years, commercial development in the Canadian Oil Sands has been the generator of a population explosion in northern Alberta. Oil sector workers seeking stable employment and high wages have been drawn to the region for decades; often with the intention of re-settling permanently (or semi-permanently) in local communities near industrial activities. These population increases have long been the driver of urban (and sub-urban) development in Fort McMurray; which has grown to become a fully functioning industrial town of nearly 100 thousand permanent residents. While many consider Fort McMurray a paragon of the contemporary ‘single industry’ (or company) town, an exclusive academic focus on ‘city-building’ has failed to acknowledge the increasing relevance of the company work camp in accommodating perpetual population increases. Indeed, statistical and demographic data – gathered by the Regional Municipality of Wood Buffalo – has revealed a trend prioritizing the deployment of company camps in lieu of permanent improvements to the existing urban construct. Overwhelmingly, the camp has been characterized as the natural consequence of industrial expansion: as resource extraction operations advance farther into the Canadian hinterland, the centripetal urban model (i.e. Fort McMurray) is rendered increasingly obsolete. The expanding industrial footprint has necessitated an alternate (extra)urban project. This assumption - that the camp is inevitable - has severely limited the ongoing public discourse surrounding contemporary working accommodations, and has contributed to a perception of the camp as ‘benign’ or ‘passive’ when – in fact – the opposite is true. This thesis aims to assess the current scope and scale of camp deployment through a careful accounting of individual accommodations sites while simultaneously exploring the organizational prerogatives of camp deployment. The camp – as extra-urban paradigm – is linked to an explicit economic agenda which has successfully institutionalized a ‘nomadic,’ ‘transient,’ or otherwise ‘precarious’ working regime on what is arguably Canada’s most significant industrial project.