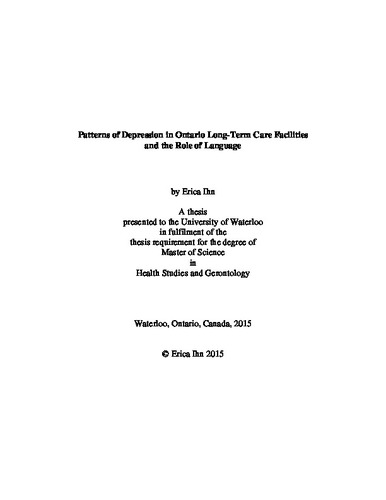 Background: Little is known about the mental health and care provided to older adults who may not speak English and those who reside in long-term care facilities (LTCFs), particularly their experiences with depression. Limited English proficiency (LEP) has been found to complicate medical practice and may be a barrier to depression treatment. In Ontario, ethno-specific nursing facilities exist to provide care that is consistent with the cultural preferences of different ethnic groups, including language preferences. An important feature of these facilities is having staff and residents who speak the same language as immigrant residents. However, these facilities often have long-wait lists and are in high demand among older adults of different ethnic backgrounds. With the aging population, there may be an increasing number of immigrant older adults entering care, creating a diverse resident population. Providing care to older adults who may have LEP may be a challenging but critical process for identifying and appropriately treating depression in both mainstream and ethno-specific homes. Objectives: The purpose of this study was to examine patterns of depression among LTCF residents who have different language preferences. This study also examined depression outcomes among nursing facilities that have ‘high’ and ‘low’ concentrations of residents who do not speak English or French. Methods: Secondary data analysis was conducted on data derived from the Minimum Data Set (MDS 2.0) for LTCF residents living in Ontario. Observations were stratified according to primary language spoken which was English, French or Other. Bivariate analyses was used to determine statistically significant predictors for depression symptoms in each language group. Using generalized estimating equations, final adjusted models were created for the English, French and Other residents that allowed to predict depressive symptoms. LTCFs that had a ‘high’ concentration of ‘other’ language speaking residents were also identified. Facilities with a ‘low’ concentration of ‘other’ language speaking residents were identified as mainstream facilities. Depression quality indicators were used to identify improvement or decline in rates in depressive symptoms, adjusted for resource intensity. Results: The results of this study showed residents who did not speak English or French were found to be more cognitively impaired and less socially engaged. At admission and the follow-up assessment, 25.3% and 27.5% of Other language speaking residents, 32.2% and 36.3% of English residents, and 29.0% and 31.3% of French residents had depressive symptoms as indicated by the Depression Rating Scale. The smallest proportion of residents with depressive symptoms taking antidepressants was the Other language group where, at admission, 49.9% of residents were taking antidepressants while 52.9% were taking antidepressants at follow-up. The factors associated with depressive symptoms for the English residents were aggressive behaviour, unpleasant mood in the morning, pain, health instability, cognitive impairment, limitations in activities of daily living, anxiety, depression diagnosis, and sex. Logistic regression using generalized estimating equations identified the admission factors predictive of depressive symptoms at follow-up for the French residents were aggression, pain, cognitive impairment, and a reduced social interaction. The factors that were significant in predicting depressive symptoms for the Other language speaking residents were aggressive behaviour, pain, cognitive impairment, depression diagnosis and age. For the depression quality indicators, the French and Other language speaking residents were found to have higher rates of improvement in depressive symptoms and lower rates of decline in symptoms compared to the English speaking residents. Higher rates of improvement and lower rates of decline in depressive symptoms were found in the ‘high’ concentration facilities for all residents, regardless of language. Conclusion: Residents who do not speak English or French experience differences in depressive symptoms and treatment compared to the other language groups. Language barriers experienced by residents can create challenges for staff in identifying depressive symptoms and providing treatment. This may be the case for older adults who not only speak a different primary language but are also documented as being more cognitively impaired or display acts of aggressive behaviour. The benefits of ethno-specific facilities are evident given that quality of depression care was better, regardless of language, for facilities with higher concentrations of non-English speaking residents. However, due to high demand and lack of availability, immigrant older adults may need to reside in mainstream facilities where they may experience a language barrier. More research to inform policy is needed in order to provide culturally appropriate mental health care for these residents.