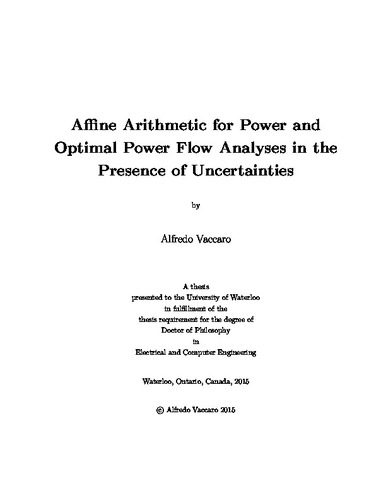 Optimal power system operation requires intensive numerical analyses to study and im- prove system security and reliability. To address this issue, Power Flow (PF) and Optimal Power Flow (OPF) analyses are important tools, since they are the foundation of many power engineering applications. For the most common formalization of these problems, the input data are specified using deterministic variables resulting either from a snapshot of the system or defined by the analyst based on several assumptions about the system under study. This approach provides problem solutions for a single system state, which is deemed representative of the limited set of system conditions corresponding to the data assumptions. Thus, when the input conditions are uncertain, numerous scenarios need to be evaluated. To address the aforementioned problem, this thesis proposes solution methodologies based on the use of Affine Arithmetic (AA), which is an enhanced model for self-validated numerical analysis in which the quantities of interest are represented as affine combinations of certain primitive variables representing the sources of uncertainty in the data or approximations made during computations. In particular, AA-based techniques are proposed to solve uncertain PF and OPF problems. The adoption of these approaches allows to ex- press the uncertain power system equations in a more convenient formalism compared to the traditional and widely used linearization frequently adopted in interval Newton methods. The proposed techniques allow to reliably estimate the PF and OPF solution hull by taking into account the parameter uncertainty inter-dependencies, as well as the diversity of uncertainty sources. A novel AA-based computing paradigm aimed at achieving more efficient computational processes and better enclosures of PF and OPF solution sets is conceptualized. The main idea is to formulate a generic mathematical programming problem under uncertainty by means of equivalent deterministic problems, defining a coherent set of minimization, equality and inequality operators. Compared to existing solution paradigms, this formulation presents greater flexibility, as it allows to find partial solutions and inclusion of multiple equality and inequality constraints, and reduce the approximation errors to obtain better PF and OPF solution enclosures.