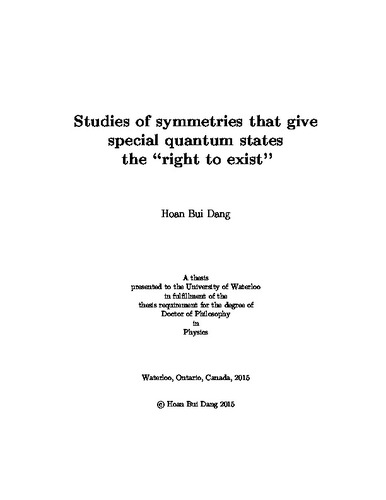 In this thesis we study symmetric structures in Hilbert spaces known as symmetric informationally complete positive operator-valued measures (SIC-POVMs), mutually unbiased bases (MUBs), and MUB-balanced states. Our tools include symmetries such as the Weyl-Heisenberg (WH) group symmetry, Clifford unitaries, Zauner symmetry, and Galois-unitaries (g-unitaries). In the study of SIC-POVMs, we found their geometric significance as the ``most orthogonal'' bases on the cone of non-negative operators. While investigating SICs, we discovered a linear dependency property of the orbit of an arbitrary vector with the Zauner symmetry under the WH group. In dimension d = 3, the linear dependency structures arising from certain special SIC states are identified with the Hesse configuration known from the study of elliptic curves in mathematics. We provide an analytical explanation for linear dependencies in every dimension, and a numerical analysis based on exhaustive numerical searches in dimensions d = 4 to 9. We also study the relations among normal vectors of the hyperplanes spanned by the linearly dependent sets, and found 2-dimensional SICs embedded in the Hilbert space of dimension d = 6, and 3-dimensional SICs for d = 9. A full explanation is given for the case d = 6. Another study in the thesis focuses on the roles of g-unitaries in the theory of mutually unbiased bases. G-unitaries are, in general, non-linear operators defined to generalize the notion of anti-unitaries. Due to Wigner's theorem, their action has to be restricted to a smaller region of the Hilbert space, which consists of vectors whose components belong to a specific number field. G-unitaries are relevant to MUBs when this number field is the cyclotomic field. In this case, we found that g-unitaries simply permuted the bases in the standard set of MUBs in odd prime-power dimensions. With their action further restricted only to MUB vectors, g-unitaries can be represented by rotations in the Bloch space, just as ordinary unitary operators can. We identify g-unitaries that cycle through all d + 1 bases in prime power dimensions d = p^n where n is odd (the problem in even prime power dimensions has been solved using ordinary unitaries). Each of these MUB-cycling g-unitaries always leaves one state in the Hilbert space invariant. We provide a method for calculating these eigenvectors. Furthermore, we prove that when d = 3 mod 4, they are MUB-balanced states in the sense of Wootters & Sussman and Amburg et al.