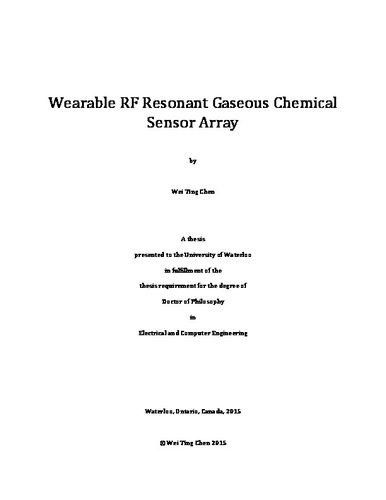 Biomarker detection is a major engineering goal that enables numerous applications in the fields of biomedical and law enforcement. By monitoring the conditions of the subject with a dedicated biomarker detection system, the health condition as well as other biomedical parameters of interest can be evaluated in real-time, and further preemptive measures can be taken to improve the safety and chance of survival of the subject. In the pursuit of a better biomarker monitoring system, the ubiquitous and unobtrusiveness of the sensor is proven to be a critical design factor that directly impacts the subject’s safety and the comfort level. The thesis presents the research results obtained for a novel single-port, multi-pole resonant sensor array fabricated on a novel Frame-Flex flexible substrate for a wearable epidermal ethanol sensor system in an attempt to achieve minimal obtrusiveness to the subject under testing. In this system, individual sensors carrying different functional polymers are brought together to share the same electrical input and output, and their resonance behavior along with inter-resonator coupling are captured through a single reflected array response curve (S11). Initially, six RF resonant sensors carrying different polymeric sensing materials have been characterized individually under exposures of ethanol and three other interferents in order to characterize the steady-state and transient responses of the polymeric sensing materials. A thin film resonant sensor and a combline cavity-based resonant gaseous chemical sensor for chemical gas line integrated sensing system have been designed employing some of these polymeric sensing materials. Next, thin film RF sensors have been cascaded together and fabricated on the Kapton-SU-8 Frame-Flex flexible substrate, forming the flexible single-port, multi-resonator resonant sensor array. The array response was collected from its S11 response at the input port of the array. Then, a coupling-matrix readout extraction (CMRE) technique has been proposed to determine, from the S11 response, the changes in each of the cascaded resonant sensors, which were used as a signature to identify different chemical analytes. The proposed CMRE technique was then employed to obtain the coupling signatures of four analytes on various flexible sensor arrays. It has been successfully shown that the array response analyzed through the CMRE technique can clearly distinguish the presence of ethanol from other chemical interferents. For other complex mixtures of ethanol and other unwanted analytes, the distinctive coupling signatures obtained by CMRE can be used as a reliable data source fed to post-readout multi-variant analysis for pattern recognition. The research has made a contribution to establishing the engineering foundation for the development of wearable transdermal gaseous biomarker sensors / sensor arrays with low cost, optimal unobtrusiveness, and a compact form factor.