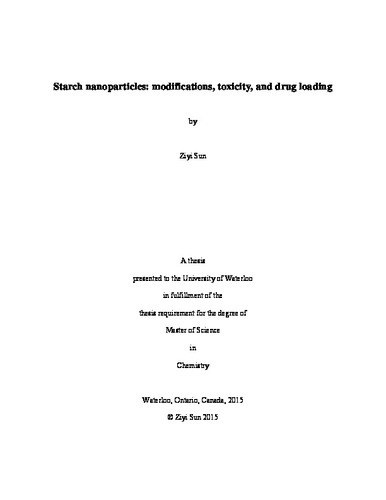 Nanoparticles as drug delivery vehicles have been well tested and transferred into clinical practice in the past few decades. The success of most nanocarriers is attributed to their biocompatibility, controlled release and unique size-dependent properties. In this regard, I proposed that starch nanoparticles (SNPs) might be a good candidate for drug delivery due to their excellent biocompatibility. The crosslinked SNPs supplied by EcoSynthetix Inc. are nanogel-like materials with many potential advantages, including good biocompatibility, biodegradability, and high capacity for loading drugs. In addition, SNPs can be engineered to achieve targeted delivery and sustained release of drugs. So far the SNPs from EcoSynthetix are only used commercially in the paper coating industry. The chemical modifications of SNPs are expected to generate new materials that can be used for drug and gene delivery. Since the safety of nanomaterial is of great concern in biomedical applications, one objective of this research is to study the toxicity of the unmodified and modified SNPs. Through my research, the reason for the toxicity is attributed to free crosslinker molecules present in the sample, and they can be removed by washing. For drug loading study, doxorubicin (Dox), a highly effective clinical anticancer drug, was chosen as the model drug. Due to the significant side effects of Dox, it is important to develop targeted delivery vehicles to decrease its toxicity to the healthy tissues. While several biocompatible nanocarriers have been developed to deliver Dox, the synthesis of these vehicles is often complicated and expensive. Compared to these delivery platforms, the SNPs are renewable and can be produced commercially on a large scale. Therefore, the second objective is to synthesize and characterize carboxyl-modified SNPs for Dox loading. The drug loading/release kinetics and the efficacy of drug complex were studied and compared to that of the free drug. Finally, cationic SNPs developed by a co-worker were evaluated and utilized for DNA delivery. DNA adsorption onto the cationic SNPs was investigated, and then the cellular uptake efficiency of the DNA/SNPs complexes was were tested and formed to be comparable to a commercial gene transfection agent. This new generation of SNP platform holds great promise for the treatment of cancer in the future.