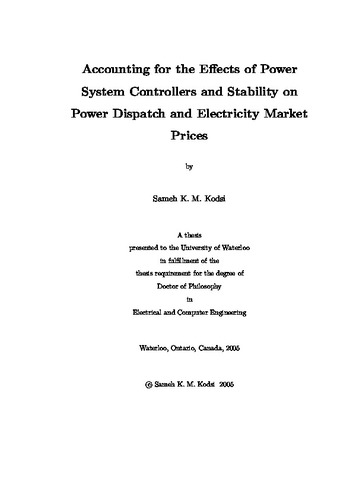 Recently, the widespread use of power system controllers, such as PSS and FACTS controllers, has led to the analysis of their effect on the overall stability of power systems. Many studies have been conducted to allocate FACTS controllers so that they achieve optimal power flow conditions in the context of Optimal Power Flow (OPF) analysis. However, these studies usually do not examine the effect of these controllers on the voltage and angle stability of the entire system, considering that the types of these controllers and their control signals, such as reactive power, current, or voltage, have significant effect on the entire system stability. <br /><br /> Due to the recent transition from government controlled to deregulated electricity markets, the relationship between power system controllers and electricity markets has added a new dimension, as the effect of these controllers on the overall power system stability has to be seen from an economic point of view. Studying the effect of adding and tuning these controllers on the pricing of electricity within the context of electricity markets is a significant and novel research area. Specifically, the link among stability, FACTS controllers and electricity pricing should be appropriately studied and modelled. <br /><br /> Consequently, in this thesis, the focus is on proposing and describing of a novel OPF technique which includes a new stability constraint. This technique is compared with respect to existent OPF techniques, demonstrating that it provides an appropriate modelling of system controllers, and thus a better understanding of their effects on system stability and energy pricing. The proposed OPF technique offers a new methodology for pricing the dynamic services provided by the system's controllers. Moreover, the new OPF technique can be used to develop a novel tuning methodology for PSS and FACTS controllers to optimize power dispatch and price levels, as guaranteeing an adequate level of system security. All tests and comparisons are illustrated using 3-bus and 14-bus benchmark systems.