Effect of Culture Conditions on the Glycosylation Pattern of mAb 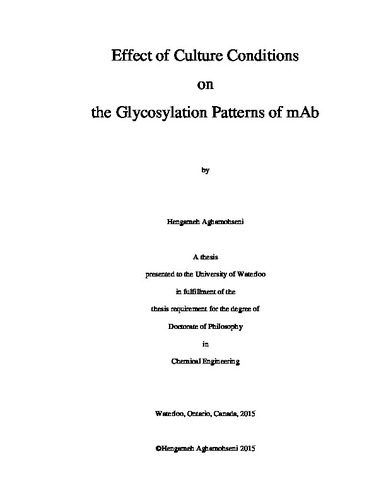 The importance of cell culture environment on the glycan distribution of a newly developed monoclonal antibody (mAb) has been comprehensively studied through a combination of experiment and mathematical modeling. The ultimate goal of this research was to formulate a mathematical framework that can be used to determine a set of operation conditions including essential nutrient levels, byproduct concentration as well as pH and temperature optimum conditions to control the glycan profiles. In this regard, CHO DUXB cells were cultivated at different levels of initial glutamine concentrations (0, 2, 4, and 8 mM), pH levels (Reduced from the beginning of the culture or shifted down after the exponential phase to 6.8±0.05) and temperature incubation (Reducing and Shifting temperature strategies to 33˚ C). The relative abundance of glycan structures was determined by hydrophilic interaction liquid chromatography and the galactosylation index (GI) and the sialylation index (SI) were formulated to monitor the time profile of GI and SI levels during cultures of typical 10 days duration. Increasing the initial level of glutamine from 0 to 8 mM glutamine at constant level of 25 mM glucose resulted in a higher consumption rate of glucose and consequently lowers galactosylation levels due to probable decrease of the nucleotide sugars pool at glucose limited condition. Increasing the initial glutamine up to 8 mM was not effective for cell growth, and some growth inhibition due to high concentration of ammonia was observed. The initial levels of glutamine concentration did not affect the specific mAb productivity and consequently, did not impact the residence time of mAb in the Golgi and evolution of glycosylation. For experiments initiated with different levels of glutamine, the GI values were mostly affected by the availability of glucose and ammonia accumulation. The batches initiated without glutamine supplementation reached a higher value of GI than batches cultivated with glutamine supplementation. It was hypothesized that due to the observed co-metabolism of glucose and glutamine, glucose depletes faster in the presence of glutamine thus becoming unavailable for glycosylation earlier in the culture. It was also observed that the produced ammonia resulting from glutamine conversion had a main effect on the activity of glycosyltransferase enzymes and consequently, led to low levels of SI. pH reduction had negative effects on cell growth, mAb productivity but positive effects on galactosylation and sialylation. At lower pH operation, GI rose because of a low consumption of glucose for cell growth and SI improved because of higher sialyltransferases activity at Reduced-pH conditions. The mechanisms for the effect of pH on glycosylation were inferred from a combination of experimental observations and by using the GLYCOVIS software that describes all possible glycosylation reactions occurring in the Golgi. Regardless of the initial levels of glutamine, mild hypothermia had a significant effect on the cell growth, mAb productivity and glycosylation profile. Cell growth was reduced at lower temperature and cell viability remained high for a longer time of cell cultivation. Temperature affected the specific glucose consumption rate and glucose was mainly consumed for mAb production as specific mAb productivity and volumetric mAb productivity were enhanced significantly. In the spite of a higher residual glucose concentration at lower temperature compared to the control batches, the GI and SI level were not improved. This fact is likely to be correlated to the higher specific productivity of mAbs that results in a reduced residence time in the Golgi complex. Finally, a novel dynamic model that relates culture conditions to glycosylation was proposed. The model consists of two sub-models: one describing the dynamic balances of extracellular metabolites whereas the other sub-model is based on a semi-empirical balance on a lump sum of nucleotides sugars and the correlation between these sugars’ levels to the galactosylation index (GI). Both sub-models’ predictions were found to be in a good agreement with the experimental data. These models can be combined together to relate the extracellular conditions to glycosylation indices thus opening the possibility to optimize the glycoprofiles by model based optimization. Such optimization may be able to address in future work the tradeoff that has been observed in this thesis between mAb productivity and glycosylation, i.e. higher productivity is generally accompanied by lower glycosylation and vice versa.