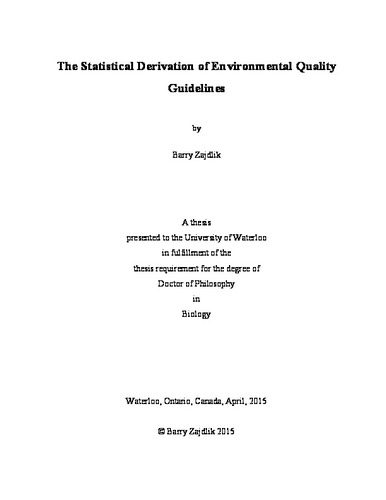 The thesis investigated statistical tools to improve the derivation of direct and indirect environmental quality guidelines (EQGs). Direct EQGs use measurements taken directly from the environmental matrix or phase of interest to estimate an EQG. An example is the set of Ontario Typical Ranges (OTR) that are used as criteria for lakefill, storm water pond sediment, brownfields remediation, application of non-agricultural source materials to farmland and as general soil benchmarks for use in risk assessments. An OTR for a specific analyte is estimated as a quantile of a dataset comprised of jurisdiction-specific direct measurements. OTRs are estimated in a variety of matrices; currently the most sampled matrix is surficial soil. OTRs estimated using rural park data include background concentrations and non-point source and/or long range transport contributions. As such, these are estimates of ambient levels (ALs) used by many jurisdictions including Canada, as source terms in human health and ecological risk assessments. A limitation of soil OTRs is that OTRs are estimated within administrative regions without consideration of soil taxonomy or pedogenic processes. Further limitations are the logic underpinning how administrative regions are combined and the choice of sub-optimal statistical tools. Weaknesses of the current OTR derivation method were addressed in this thesis by geostatistical models that do not consider administrative regions thereby obviating the logic paradigm for combining administrative regions and choice of sub-optimal statistical tools. Geostatistically derived site-specific ALs reduce the bias implicit in more broadly based ALs such as those generated using the current OTR paradigm. Given the myriad uses of OTRs in Ontario and ALs globally, reduced bias will result in improved environmental decision making. Indirect EQGs use measurements taken from a surrogate environmental matrix or phase to estimate an EQG in the environmental matrix or phase of interest. An example is the set of Canadian Council of Ministers of the Environment (CCME) water quality guidelines (WQGs). In this EQG derivation paradigm, analyte concentrations are measured in water (the surrogate environmental matrix) and calibrated to responses in aquatic species (the environmental phase of interest). Those responses are used to estimate a concentration in water to achieve the desired level of protection (a calibration experiment in statistical terminology). CCME WQGs are used to derive effluent quality criteria and as general water quality benchmarks for use in risk assessments. A limitation of the indirect EQGs (CCME WQGs) is in the application of the CCME- preferred species sensitivity distribution (SSD) approach to datasets that represent mixtures of sensitivities due to the presence of two or more modes of toxic action. In this thesis, the presence of multimodal SSDs for a pesticide with a known mode of toxic action is demonstrated. Multimodal SSDs are also demonstrated in non-pesticide contaminant SSDs (nonylphenol in water and zinc in soil). The implication of ignoring multimodality is an inadvertent and unknown degree of over or under-protection at the ecosystem level. One alternative to ignoring multimodality is to restrict attention to only those species with the most sensitive mode of toxic action. This approach is not preferred because: 1) it is wasteful of toxicity test data leading to unnecessarily wide confidence intervals (the lower of which comprises the EQG) and; 2) the species comprising sub-distributions may not be known for a required element such as soil zinc due to the inclusion of multiple phyla. Another alternative is to statistically identify sub-distributions and estimate EQGs from the most relevant sub-distribution as appropriate. This is done by estimating the parameters of the mixture distribution, identifying the relevant distribution and using the jointly estimated parameters to estimate the EQGs. The advantage of this approach is that the lower confidence interval (which is the EQG) is less biased than it would be otherwise. Thus because the bias is reduced, the level of environmental protection afforded is more consistent with the nominal level of protection.