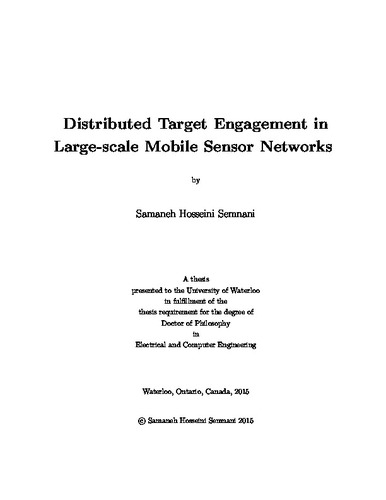 Sensor networks comprise an emerging field of study that is expected to touch many aspects of our life. Research in this area was originally motivated by military applications. Afterward sensor networks have demonstrated tremendous promise in many other applications such as infrastructure security, environment and habitat monitoring, industrial sensing, traffic control, and surveillance applications. One key challenge in large-scale sensor networks is the efficient use of the network's resources to collect information about objects in a given Volume of Interest (VOI). Multi-sensor Multi-target tracking in surveillance applications is an example where the success of the network to track targets in a given volume of interest, efficiently and effectively, hinges significantly on the network's ability to allocate the right set of sensors to the right set of targets so as to achieve optimal performance. This task can be even more complicated if the surveillance application is such that the sensors and targets are expected to be mobile. To ensure timely tracking of targets in a given volume of interest, the surveillance sensor network needs to maintain engagement with all targets in this volume. Thus the network must be able to perform the following real-time tasks: 1) sensor-to-target allocation; 2) target tracking; 3) sensor mobility control and coordination. In this research I propose a combination of the Semi-Flocking algorithm, as a multi-target motion control and coordination approach, and a hierarchical Distributed Constraint Optimization Problem (DCOP) modelling algorithm, as an allocation approach, to tackle target engagement problem in large-scale mobile multi-target multi-sensor surveillance systems. Sensor-to-target allocation is an NP-hard problem. Thus, for sensor networks to succeed in such application, an efficient approach that can tackle this NP-hard problem in real-time is disparately needed. This research work proposes a novel approach to tackle this issue by modelling the problem as a Hierarchical DCOP. Although DCOPs has been proven to be both general and efficient they tend to be computationally expensive, and often intractable for large-scale problems. To address this challenge, this research proposes to divide the sensor-to-target allocation problem into smaller sub-DCOPs with shared constraints, eliminating significant computational and communication costs. Furthermore, a non-binary variable modelling is presented to reduce the number of inter-agent constraints. Target tracking and sensor mobility control and coordination are the other main challenges in these networks. Biologically inspired approaches have recently gained significant attention as a tool to address this issue. These approaches are exemplified by the two well-known algorithms, namely, the Flocking algorithm and the Anti-Flocking algorithm. Generally speaking, although these two biologically inspired algorithms have demonstrated promising performance, they expose deficiencies when it comes to their ability to maintain simultaneous reliable dynamic area coverage and target coverage. To address this challenge, Semi-Flocking, a biologically inspired algorithm that benefits from key characteristics of both the Flocking and Anti-Flocking algorithms, is proposed. The Semi-Flocking algorithm approaches the problem by assigning a small flock of sensors to each target, while at the same time leaving some sensors free to explore the environment. Also, this thesis presents an extension of the Semi-Flocking in which it is combined with a constrained clustering approach to provide better coverage over maneuverable targets. To have a reliable target tracking, another extension of Semi-Flocking algorithm is presented which is a coupled distributed estimation and motion control algorithm. In this extension the Semi-Flocking algorithm is employed for the purpose of a multi-target motion control, and Kalman-Consensus Filter (KCF) for the purpose of motion estimation. Finally, this research will show that the proposed Hierarchical DCOP algorithm can be elegantly combined with the Semi-Flocking algorithm and its extensions to create a coupled control and allocation approach. Several experimental analysis conducted in this research illustrate how the operation of the proposed algorithms outperforms other approaches in terms of incurred computational and communication costs, area coverage, target coverage for both linear and maneuverable targets, target detection time, number of undetected targets and target coverage in noise conditions sensor network. Also it is illustrated that this algorithmic combination can successfully engage multiple sensors to multiple mobile targets such that the number of uncovered targets is minimized and the sensors' mean utilization factor sensor surveillance systems.is maximized.