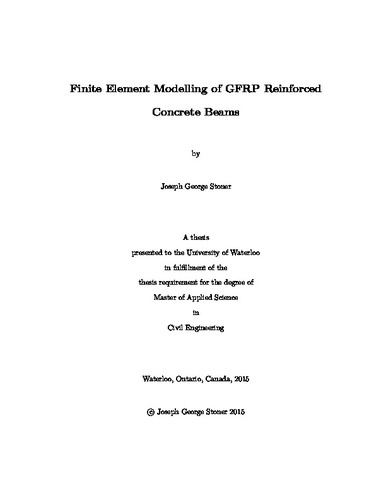 The numerical modelling of twelve concrete beams reinforced with glass fibre reinforced polymer (GFRP) longitudinal and transverse bars was performed by the author using the finite element analysis (FEA) software ABAQUS. The experimental beam tests as performed by Krall (2014) were used to calibrate the Concrete Damaged Plasticity Model (CDPM) provided within ABAQUS. Recommendations were made regarding the modelling of concrete beams reinforced with and without GFRP stirrups. The analyses of beams without stirrups are presented first. The Hognestad Parabola was effective in modelling the compressive behaviour of the concrete. A fracture mechanics approach was used to model the post-cracking tensile behaviour of the concrete, with a bilinear stress-displacement response and a fracture energy of 90N/m providing the strongest accuracy. The use of discrete truss sections and smeared membrane sections to model the GFRP longitudinal reinforcement were both studied; both methods were effective, but the truss approach is recommended. Further modifications to the CDPM were necessary for the modelling of beams with stirrups. The presence of GFRP stirrups that do not exhibit the plastic behaviour that steel stirrups exhibit resulted in concrete-governed compression failures. To consider the confining effects that the stirrups had on the concrete, an increased dilation angle of 50 degrees was used in combination with an increased maximum concrete compressive strain. Truss reinforcement was again used for the longitudinal reinforcement, whereas membrane sections are recommended for the stirrups. A parametric study was performed by applying the proposed models to beams with slenderness ratios (a/d) ranging from 1.5 to 6.5. For a/d less than 2.5, further research is recommended to confirm the influence of the arch effect on the shear strength of deep members. For a/d = 2.5, the proposed ABAQUS models agree strongly with the shear model proposed by Nehdi et al. (2007). For larger ratios, the proposed models agree strongly with the flexural strength predictions. It was therefore shown that the proposed ABAQUS models are effective in accurately predicting the strength of beams with and without stirrups for various a/d ratios, and are able to produce reinforcement strain responses and crack patterns that agree strongly with the experimental data.