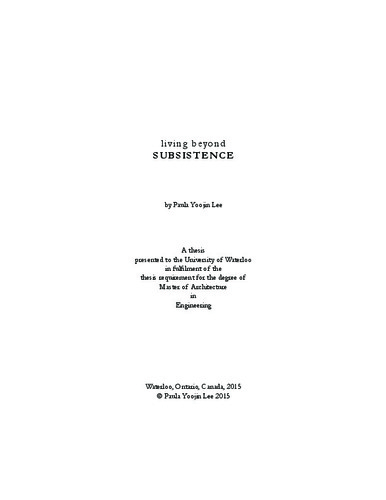 The residential tower is the setting for various manifestations of domestic environments. Every unit consists of a particular narrative of an individual within the larger collective. Yet this crucial microcosm that links architecture and society is frequently disregarded as “housing” - stripped of the notion of home. The contemporary treatment of domestic space as “housing” reduces it to a series of numerical exercises of square footage and abstract values favourable for marketability to the general population. In an age where housing is considered a commodity, social housing is overlooked as an assignment whose sole aim is to satisfy basic socio-demographic needs. As architects, we have yet to see through the lack to encompass the notion of home in social housing. The idea of home is familiar to all. Simultaneously, it resists objective categorization because home is experienced as a subjective sense of space unbound by hegemonic conditions and facticity. Veiled by the appearance of lack, the complex and multidimensional notion of home and neighbourhood that defines the quality of space is not fully explored in the design process of affordable tower residences. This form of minimal space derived from a single notion of home causes stagnation in the lives of residents - hindering the imagination of reality that is shaped by the way one relates to the idea of self in their space and time. Far from being a desirable place to live, the low-income residential towers in St. James Town render an overarching monotony to the everyday life of their many residents. Here, life, in all its living manifestations, is simply a problem to be solved. The design fails to apprehend the underlying cause of social instability that led residents to their current state. To influence residents beyond simply providing solutions for their basic needs, the design of their homes should embrace the desire for living. Home is not a mere space of sustenance; it is a place of living far beyond subsistence. This thesis re-imagines the singular idea of home as functional space in a low-income tower context. The idea of home will be introduced as a multidimensional living space that embraces various levels of social exchange to provide for collective empowerment. The renovation designed here proposes to break and deregulate the common idea of the lifestyles of low-income tower residents through interpolating a mediating social space between the existing scenes of solidly private and public spaces in the chosen apartment site at 200 Wellesley Street East, Toronto, Ontario, Canada.