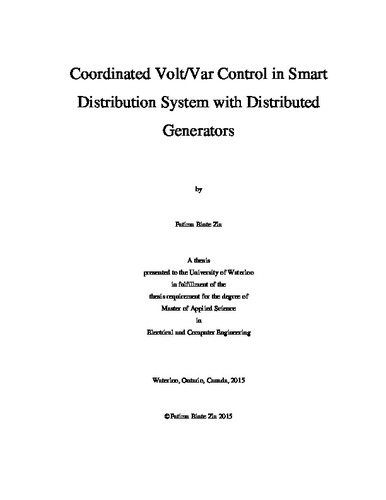 The high penetration level of Distributed Generation (DG) is one of the most attractive features of the smart grid aside from being automatic, modern, reliable and efficient. However, high penetration comes with more challenges to deal with such as the voltage and reactive power (Volt/Var) control and increased power loss. To address the issues in incorporating DGs in the power distribution system, this thesis provides a closer look at the Volt/Var control and power loss concerns caused by the random behavior of DGs. Modifying conventional control techniques by moving to a smart technique is a core requirement to mitigate these issues. Voltage control is hard if it is solely handled by on load tap changer (OLTC) transformer and switched shunt capacitors (SC) due to the high penetration and unpredictable behaviors of DGs. The ability to inject the reactive power of the DGs with the proper coordination of SC and OLTC can contribute to control Volt/Var besides minimizing the power loss. Centralized or distributed control of the Volt/Var control device integrated with heuristic based control scheme can be a promising solution to this problem. The distributed control scheme based on the automated agent technology is the first solution to the Volt/Var control problem presented in this thesis. . This is also known as the multi‐agent based system. Each device, i.e. OLTC, DG unit, SC and loads have their own intelligent agents which are capable of optimizing their operations via local measurements and communications with other control agents. Assuming the existence of proper communication medium and protocols, each agent without the knowledge of the whole system, can contribute to control Volt/Var. While doing so, none of the agents are going to violate their own requirements while attaining the global objective of Volt/Var control and reducing total system loss. The proposed control scheme for Volt/Var control is tested and simulated using the 8 bus distribution system in Matlab/Simulink. Fuzzy logic controller for each agent is used based on predefined rules. It was found that the voltage profile is improved after coordinating all the control devices with DGs. The number of tap operations for OLTC is also reduced after the coordination resulting to its increased lifetime. In the second part of this thesis centralized genetic algorithm based control mechanism is introduced in the system. In this section OLTC and SC are treated as controllers and DGs are treated as PQ bus. To get optimum voltage and realize reactive power control, the second part shows 24 hours lead time coordination among the OLTC, SC and DGs. This coordination takes place utilizing genetic algorithm. The optimal number of switching during the 24-hour period for both SCs and OLTCs is determined with the goal to control reactive power flow or minimize the power loss, and above all to keep the voltage profiles within acceptable levels. The functionality of the proposed technique is tested through the simulation of a 30-bus system in Matlab. Findings from the simulation results showed that the DG operation no longer imposes a significant effect on the voltage fluctuations and power loss profile in the distribution system if the OLTC and SC are switched based on a 24-hour forecasted data of the DGs. The adaptive control technique which updates switching time and number every 6 hours of the day gives a better loss profile since the forecasted data becomes more accurate with time. This approach is simple, straightforward and efficient.