Making Sense of the Fractal Urban Form and Function: an Agent-Based Modelling Approach 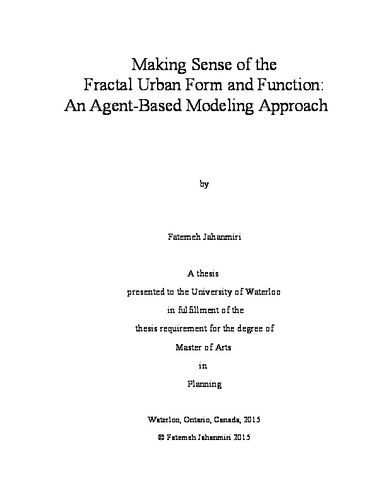 Despite their complexity, cities exhibit very similar fractal properties in various aspects of their form and function, including their social and spatial profiles. These similarities reveal underlying forces behind the formation and evolution of the cities that bind their interrelated profiles. Discovering these underlying forces is critical in order to achieve a comprehensive science of cities. This study proposes a process-based framework that seeks to explain some observed similarities in the social and spatial profiles of the cities. It hypothesizes that fractal patterns in physical urban form originate from a scale-free structure of socio-economic groups and organizations in the cities. An abstract agent-based model is developed to test the hypothesis by simulating the growth of a virtual city from a limited number of agents to a populated landscape with a fractal pattern. Results from the model analysis justify that the aggregate fractal pattern in the urban form can originate from a scale-free distribution of group sizes in the cities, which is in turn a result of preferential attachment in the human aggregation process. The model illustrates that the fractal dimension of the distribution of buildings varies based on the population growth rate, the human interaction rate, and the transportation cost. The findings of this research show that by measuring the fractal dimension of urban forms, we can infer the general pattern of human aggregation structures, including the distribution of activity groups in cities. Acknowledging this relationship may encourage planning and governance to approach attempts to achieve large-scale changes in urban form from the gateway of socio-economic structures and group formation processes. The thesis result motivates further investigation into the relationships between the social group formation process and the compactness and efficiency of cites. Future direction of this work studies the empirical relationships between urban structure and the structure of social networks.