Finding the “Generationed City”: The Form and Structure of Young Adult Settlement Patterns 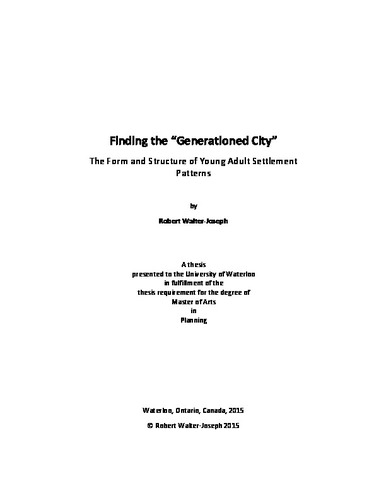 This thesis examines the present patterns in the residential geographies of young adults in major cities in Canada and the United States. It explains how the differences and similarities in young adult residential patterns across metropolitan regions are shaped by the wider context of post-Fordist economic restructuring, urban planning, and the neoliberal remaking of the city. Research has shown that since the early 1980s, the young adult population has been centralizing. The sharpened division of space by demographic variables has been understood as a result of an amalgam of post-Fordist neoliberal restructuring (gentrification, “condofication” and revalorization) and unique generational dimensions such as increased educational requirements for employment and delays in marriage and child rearing among millennials. Considering 57 major metropolitan regions in Canada and the United States, this study examines the form and structure of young adult settlement (persons 25-34) through geographic information systems and spatial analytical methods. The degrees of centrality, concentration and form of the distributions of young adult residence are used to describe structure. The study identifies the predominance of downtown settlement in young adult residential patterns. The results point to a dominant pattern of centrality and poly-centricity in young adult settlement. Where regional spatial distributions exhibit strong concentrations in centralized neighbourhoods, there also exist meaningful concentrations in suburban centres. In some cities, decentralized patterns are also identified. The geography of young adult settlement is strongly associated with mixed uses, dense housing forms and accessibility through public transit. Through neoliberal forms of reinvestment and development, this blend of features is most often available downtown. “Youthification”, the process driving the centralization of young adult living, is seen in the ability for the current young adult cohort to trade residential space to maintain an affordable cost of living. The space produced in the redeveloped city is divided and consumed at a constant total cost by the young adult cohort while older populations with larger household sizes are displaced. In finding the generationed city, this study finds a built form that reflects a moment in time, built from a specific economic context for a very specific market. As millennials age, research suggests that generational requirements for residence will change greatly. It is the challenge of planners, politicians and policy makers to adopt strategies to address this form of neighbourhood change. Planners must adapt the built form throughout entire city regions to accommodate the unique demands of many generations.