Towards Increased Understanding of Innovation Intermediaries 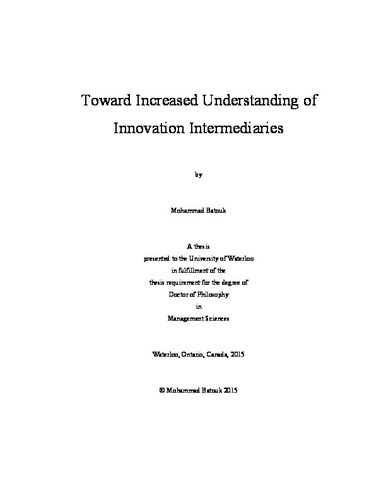 Canada spends almost 2% of its GDP on publicly funded research (OECD, 2009). However, a high percentage of research results is never put to work for the benefit of society. Of the subset of research that becomes protected by a patent, too small a proportion is commercialized successfully (Etzkowitz et. al., 2000). For this reason, accelerating the successful transfer of knowledge and the commercialization of research results are among Canada’s priorities. Innovation Intermediaries play an essential role as the 'middle men' between solvers (the inventors) and seekers (the invention recipients) toward facilitating the commercialization of research results. This research aims to identify which types of Innovation Intermediaries (IIs) and their corresponding strategies enable the success of research commercialization. This research is comprised of two stages: exploratory stage and confirmatory stage. The former investigated certain lenses to differentiate between IIs types, while the latter tested the validity and reliability of the suggested model and concurrently validated the scale items. Furthermore, various statistical analysis tools were used to analyze and assess the hypotheses as well as to reveal the statistical properties of the scales. Frooman’s (1999) Stakeholder Influence Strategy Theory (SIST) is a framework designed to address how stakeholders use the power of resource dependency to influence a focal organization. This study is among the first research studies to operationalize the constructs of Frooman’s (1999) model in the context of innovation intermediaries who facilitate the research commercialization. These constructs are used to assess the influence that an innovation intermediary receives from its stakeholder(s). Furthermore, this study associates ‘stakeholder identification and salience theory’ (Mitchell et al., 1997) with Frooman’s ‘SIST’, and then makes an extension to the model. This adjustment implies that only salient stakeholders are to be considered in the model, and that the model accounts for one-to-many relationship between an organization and many stakeholders. The extended model represents the first part of the research framework for this study, while the second part considers the impacts of stakeholders' influence on IIs' operational strategies. Data were collected from a North American (Canada and USA) sample to test two sets of hypotheses for the purpose of examining the two parts of the model; in other words, the hypotheses were tested to investigate how various II types are influenced by their stakeholders and how that influence impacts the IIs' operational strategies. This study found that the current commercialization efforts of IIs are rarely supported by rigorous evidence-based practice; further, the comparative performance metrics that are used by various IIs are mainly to justify ongoing support. In addition, this study suggests that all types of II could be located on a continuum anchored a 'uni-stakeholder approach' on one end, to 'multi-stakeholders approach' on the other; each of those who hold a uni-stakeholder perspective (USP) perceives one particular stakeholder as most salient to them, upon which they most depends, and by which they are most influenced; IIs with USP have distinguishing characteristics in terms of their main operational strategy (objectives for commercialization, paths used for commercialize, clients who are served, estimates of innovation readiness); thus, they are focused on competencies of their current practices and subsequently are recommended to advance toward a complementary mode in order to create a more comprehensive commercialization ecosystem. On the other hand, one II type was found to hold a multi-stakeholder perspective (MSP); typically, it has no dominate dependency or influence by a particular stakeholder. MSP type shows a broad operational strategy that may allow a comprehensive commercialization ecosystem; furthermore, MSP signifies a high priorities for 'potential societal and environmental benefits from the idea’ and ‘potential contribution to local society and environment’ as criteria for invention selection; accordingly, MSP my represent the most functional approach in the long run. The study contributes to the literature of II by adding to our understanding as to why there should be more than one type of II to facilitate research commercialization. Moreover, it contributes a new typology for II types and provides a scientific framework to compare and contrast various II types based on evidence. Accordingly, this work stimulates the literature of best practices in the context of IIs. Furthermore, the study validated that the influence by a salient stakeholder(s) -- to a great extent -- explains what IIs do; both the level of the dependency by II on stakeholders and II’s perception of its stakeholder's salience level predict the level of stakeholder influence on the II. That in turn facilitates the identifying of the type of influence that each stakeholder may apply on an associated II. In addition, this research provides very essential knowledge for practitioners and managers as well as to stakeholders and clients about the various types and operational strategies for each innovation intermediary type; thus, they are encouraged to evaluate advantages and disadvantages of various II types who follow a uni-stakeholders approach and the one II type who follow a multi-stakeholders approach over the short and long run. Finally, the study reports some limitations and suggests some possible topics for future research.