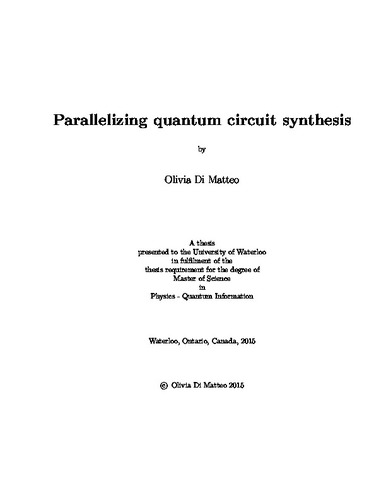 We present an algorithmic framework for parallel quantum circuit synthesis using meet-in-the-middle synthesis techniques. We also present two implementations thereof, using both threaded and hybrid parallelization techniques. We give examples where applying parallelism offers a speedup on the time of circuit synthesis for 2- and 3-qubit circuits. We use a threaded algorithm to synthesize 3-qubit circuits with optimal T -count 9, and 11, breaking the previous record of T-count 7. As the estimated runtime of the framework is inversely proportional to the number of processors, we propose an implementation using hybrid parallel programming which can take full advantage of a computing cluster’s thousands of cores. This implementation has the potential to synthesize circuits which were previously deemed impossible due to the exponential runtime of existing algorithms.