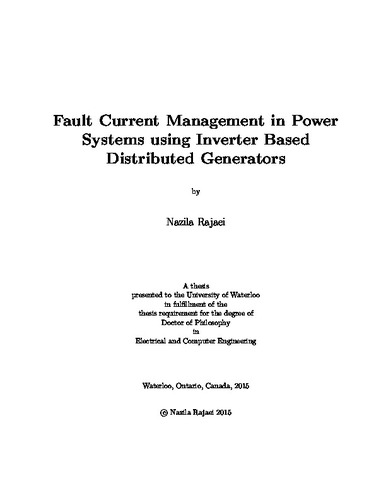 Distributed generator (DG) connection to power systems has attained special attention in recent years because it provides a number of operational and economic benefits for both utilities and customers. On the downside, the connection of many deregulated power generation units introduces new challenges to utility sectors. One of the most critical drawbacks of DG installations in power systems can be observed during a fault, when the additional DG fault current violates the original settings of protection systems. Protective devices installed in the system are designed based on the fault current analysis performed for the original system without DGs. When DGs are added, the current seen by protective devices will be different from the values originally specified. The change in the level of fault currents may alter the operation time of protective devices and disturb the coordination between primary and secondary protective devices. Consequently, serious protection problems may occur in the presence of DGs. On the other hand, many types of DGs that produce a dc voltage or a variable ac voltage require power electronic (PE) interfaces in order to connect to the power system. While these PE interfaces are used to control the active and reactive power injected to the system during normal operation, they are usually left idle during fault condition. The novel idea of this work is to employ the idle PE interface of inverter based distributed generators (IBDG) to manage the fault current flows through the power system. The scheme is based on utilizing the available current and voltage phasor information from smart meters and applying the necessary control actions to operate the IBDGs as fault current management (FCM) units. This FCM operation eases the distribution and protection system constraints on new DGs connections. From short circuit point of view, DGs with larger capacity can be connected to any location in the system without affecting the fault current magnitude. This operation also eliminates the need to disconnect DGs during each temporary fault. Moreover, the need to upgrade protective devices is reduced. From the two controllable parameters of IBDGs current, the current magnitude and current phase angle, the current phase angle is employed to manage the contribution of DGs to the total fault current without deactivating them. Three zones of FCM operation are defined for IBDGs by changing their current phase angle: zones A, B, and C. The reference current phase angle that enables the FCM operation is calculated for zone B operation when only IBDGs exist in the system. The FCM operation and the reference current phase angle are then extended for zone C operation in order to manage the contribution of other types of DGs, such as synchronous DGs, to the fault current. In another part of this work, two power flow based fault analysis techniques are developed to explore the behavior of IBDGs during fault conditions. In both, the buses with IBDGs are modeled either as PQ buses or constant current (I) buses, based on their contribution to the fault current. The backward-forward sweep algorithm is used to solve the load flow problem for radial systems during fault conditions. On the other hand, the Newton-Raphson (NR) power flow algorithm is modi ed for fault analysis of loop systems with IBDGs. In the modified NR algorithm, current formulations rather than conventional power formulations are developed for nodes with constant current IBDGs, thus permitting mismatches in the real and imaginary components of the current to be obtained in addition to the conventional active and reactive power mismatches The last part of this work introduces an algorithm for constructing protection zones with FCM capability in loop systems. The algorithm is developed in three steps, and deals with both synchronous DGs and IBDGs in the system. The method used for calculating the reference phase angle that enables the FCM operation is modified for the case of system buses with multiple lines connected to them. Further phasor calculations and illustrations are developed to show how the FCM can be applied for loop systems. Different test systems, including the IEEE 33-bus system and IEEE 30-bus system, are used to validate the proposed FCM operation and the models for fault analysis. The simulations are performed with PSCAD software, OpenDSS, and MATLAB. The results show the effectiveness of the novel FCM technique in managing the fault current seen by protective devices in power systems, and the capability of the proposed power flow based methods to analyze the behavior of IBDGs during fault conditions.