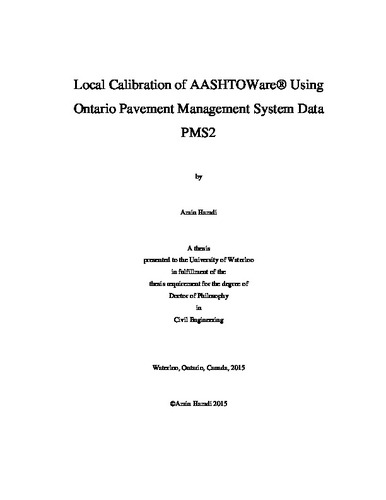 Well designed built and maintained pavements will sustain the safe and comfortable transportation of people and goods. Effective monitoring requires information about evolving pavement condition, including details about factors such as pavement distresses, climate conditions and traffic pattern which are important factors impacting the pavement conditions. Keeping track of the degree of distress over time can help extending the pavement life by applying the suitable maintenance and rehabilitation at the right time. Pavement management systems (PMSs) were originally created to archive this kind of data so that decision makers could predict future pavement performance. The Ministry of Transportation of Ontario (MTO) employs an advanced PMS tool, entitled PMS2, to record, store, and analyze data about the current and past pavement performance conditions of its network of 16,500 centre-lane kilometers of freeways, collectors, arterials, and local roads. The research presented in this thesis was focused on the use of PMS2 data for the calibration of flexible pavement performance models coefficients for Ontario as a case study Performance model coefficients were created for application with the Mechanistic-Empirical Pavement Design Guide (MEPDG), now known as AASHTOWare®, and were calibrated using statistical tools through a series of analyses of historical pavement condition data that were collected in the field. The data were classified according to pavement type and annual average daily traffic. For this study, three categories were examined and calibrated: low traffic volume (AADT < 10,000), high traffic volume (AADT > 10,000), and overall network. The spilt in data was Eighty-five percent to be used in calibration development of the performance model calibration coefficients and the remaining fifteen percent of the data were employed for validating the performance models using a variety of statistical tools. A comparison of the results with the field measurements revealed that rutting model coefficients should be locally calibrated for each category. For the low-volume, high-volume, and overall network categories, local calibration produced significant reductions in the rutting root-mean-square error (RMSE) of 30, 37, and 37 %, respectively, and in the IRI showed there was no significant correlation. The procedure and analysis methodology used in the calibration of the performance model coefficients provide a framework for the local calibration of AASHTOWare® based on a comparison of the predicted pavement distress and that documented in the PMS. This work will have important benefits to the transportation agencies as it will enable them to evaluate the feasibility of using the ASHTOWare® Design system to improve pavement management and to enhance future design and construction strategies.