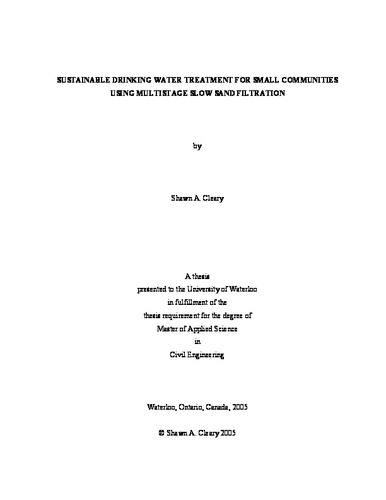 Slow sand filtration is a proven and sustainable technology for drinking water treatment in small communities. The process, however, is sensitive to lower water temperatures that can lead to decreased biological treatment, and high raw water turbidity levels that can lead to premature clogging of the filter and frequent cleaning requirements, resulting in increased risk of pathogen breakthrough. Multistage filtration, consisting of roughing filtration followed by slow sand filtration, can overcome these treatment limitations and provide a robust treatment alternative for surface water sources of variable water quality in northern climates, which typically experience water temperatures ranging down to 2&deg;C. Prior to this study, however, multistage filtration had yet to be systematically challenged in colder climates, including testing of its performance under increased hydraulic loadings and elevated influent turbidity together with cold water conditions. The primary goal of this research was to demonstrate the reliability of multistage filtration for small communities in northern climates with reference to the Ontario Safe Drinking Water Act. In this research, testing was conducted on two different pilot multistage filtration systems and fed with water from the Grand River, a municipally and agriculturally impacted river in Southern Ontario. One system featured pre-ozonation and post-granular activated carbon (GAC) stages, and shallower bed depths in the roughing filter and slow sand filter. The other system featured deeper bed depths in the roughing filter and slow sand filter, two parallel roughing filters of different design for comparison, and a second stage of slow sand filtration for increased robustness. Removal of turbidity, total coliforms, and fecal coliforms under a range of influent turbidities (1 to >100 NTU), water temperatures (~2 to 20&deg;C), and hydraulic loading rates (0. 2 to 0. 8 m/h) were investigated. In addition, the slow sand filters in each pilot system were challenged with high concentrations (~10<sup>6</sup> oocyst/L) of inactivated <i>Cryptosporidium parvum</i> oocysts. The performance of both pilot multistage filtration systems was highly dependent on the biological maturity of the system and its hydraulic loading rate. In a less mature system operating in cold water conditions (<5&deg;C), effluent turbidity was mostly below 0. 5 NTU during periods of stable influent turbidity (no runoff events) and a hydraulic loading of 0. 4 m/h, however, runoff events of high influent turbidity (>50 NTU), increased hydraulic loadings (0. 6 m/h), and filter cleaning occasionally resulted in effluent turbidity above 1 NTU. Furthermore, in a less mature system operating during runoff events of high turbidity, reducing the hydraulic loading rate to 0. 2 m/h was important for achieving effluent turbidity below 1 NTU. However, in a more mature system operating in warm water conditions (19-22&deg;C), effluent turbidity was consistently below 0. 3 NTU at a hydraulic loading rate of 0. 4 m/h, and below 0. 5 NTU at 0. 8 m/h, despite numerous events of high influent turbidity (>25 NTU). It remains to be seen whether this performance could be sustained in colder water temperatures with a fully mature filter. Removal of coliform bacteria was occasionally incomplete in a less mature multistage system, whereas, in a more mature system operating in warm water conditions (>9&deg;C), removal was complete in all measurements. Furthermore, the average removal of <i>Cryptosporidium</i> was greater than 2. 5 logs in both systems (with hydraulic loading rates ranging from 0. 4 to 0. 8 m/h) and improved with increased filter maturity. Each individual stage of the multistage system was an important treatment barrier in the overall process of turbidity and pathogen removal. The roughing filter was not only important for protecting the slow sand filter from solids loading and increasing its run length, but was also a significant contributor to coliform removal when the system was less mature. Removal of turbidity was significantly improved when the roughing filter was more mature, suggesting that biological treatment was an important treatment mechanism in the roughing filter. Although pre-ozonation was used mainly for the removal of organic carbon and colour, it achieved complete removal of coliform bacteria and was also suspected to be important for enhanced removal of turbidity. The second slow sand filter in series provided additional robustness to the process by reducing effluent turbidity to below 1 NTU during cold water runoff events of high turbidity and increased hydraulic loadings (0. 6 m/h), while achieving effluent below 0. 3 NTU during normal periods of operation. It also provided additional removals of coliforms under challenging operating conditions, and contributed an additional average removal of <i>Cryptosporidium</i> of 0. 8 logs, which resulted in cumulative removal of 3. 7 logs, approximately 1 log greater than all the other challenge tests. Collectively, the entire multistage system performed well with water temperatures ranging down to 2&deg;C, limited filter maturity, elevated raw water turbidities, and increased hydraulic loading rates. Its ability to meet the current Ontario turbidity regulations and greater than 2 log removal of <i>Cryptosporidium</i> over a range of operating conditions, with little or no process adjustment, is a testament to the robustness and minimal maintenance requirements of the process, which are desirable attributes for small water systems that are often located in rural areas. While this research demonstrated the performance of multistage filtration using pilot scale testing, it is important to note that full-scale plants tend to produce significantly better results than pilot facilities, due to long term biological maturation of the system. Overall, multistage filtration is a sustainable and cost-effective technology that, through this research, appears to be a safe, reliable, and robust treatment alternative for small and non-municipal water systems in North America and the developing world. Further, based on its performance with challenging influent water quality and cold water conditions, multistage filtration holds particular promise for small communities in northern climates that are required to meet safe drinking water regulations, but are dependent on surface water sources of variable water quality and temperatures.