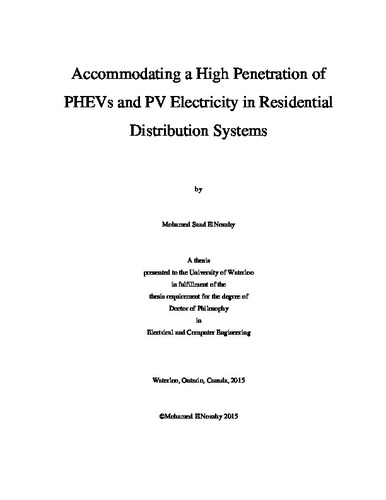 Global warming is threatening the world’s delicate ecosystems to the point where the extinction of numerous species is becoming increasingly likely. Experts have determined that avoiding such a disaster requires an 80% reduction in the 1990 levels of global greenhouse gas emissions by 2050. The problem has been exacerbated by the booming demand for electrical energy. This situation creates a complex dilemma: on the one hand, energy sector emissions must be decreased; on the other, electrical energy production must be increased to meet the growing demand. The use of renewable emission-free sources of electrical energy offers a feasible solution to this dilemma. Solar energy in particular, if properly utilized, would be an effective means of meeting worldwide electricity needs. Another viable component of the solution is to replace gasoline-powered vehicles with plug-in hybrid electric vehicles (PHEVs) because of their potential for significantly reducing greenhouse gas emissions from the transportation sector. It was once believed that integrating solar electricity into distribution systems would be relatively straightforward; however, when the penetration level of photovoltaic (PV) systems began to increase, power utilities faced new and unexpected problems, which arose primarily due to the weak chronological coincidence between PV array production and the system peak demand. PV arrays produce their peak output at noon, during low demand periods, resulting in individual instances when the net PV production exceeds the system net demand. Power then flows from low voltage (LV) to medium voltage (MV) networks. Such reverse power flow results in significant over voltages along distribution feeders and excessive power losses. For PHEVs, the situation is the direct opposite because peak demand periods coincide closely with the hours during which the majority of vehicles are parked at residences and are thus probably being charged. This coincidence causes substantial distribution equipment overloading, hence requiring costly system upgrades. Although extensive research has been conducted with respect to the individual impacts of PV electricity and PHEVs on distribution networks, far too little attention has been paid to studying the interaction between these two technologies or the resulting aggregated impacts when both operate in parallel. The goal of the research presented in this thesis is to fill this gap by developing a comprehensive benchmark that can be used to analyze the performance of the distribution system under a high penetration of both PV systems and PHEVs. However, the uncertainties associated with existing electrical loads, the PHEV charging demand, and the PV array output complicate the achievement of this goal and necessitate the development of accurate probabilistic models to express them. The establishment of such models and their use in the development of the proposed benchmark represent core contributions of the research presented in this thesis. Assessing the anticipated impacts of PHEVs and PV electricity on distribution systems is not the only challenge confronting the electricity sector. Another issue that has been tackled by numerous researchers is the formulation of solutions that will facilitate the integration of both technologies into existing networks. The work conducted for this thesis presents two different solutions that address this challenge: a traditional one involving the use of energy storage systems (ESSs), and an innovative one that hinges on a futuristic novel bilayer (AC-DC) distribution system architecture. In the first solution, the author proposes using ESSs as a possible means of mitigating the aggregated impacts of both PV electricity and PHEVs. This goal can be achieved by storing PV electricity generated during low demand periods, when reverse power flow is most likely to occur, in small-scale dispersed ESSs located at secondary distribution transformers. Thereafter, this energy is then reused to meet part of the PHEV charging demand during peak periods when this demand is most likely to overload distribution equipment. While this solution would kill two birds with one stone, the uncertainties inherent in the system make its implementation difficult. In this respect, a significant contribution of the work presented in this thesis is the use of the previously developed probabilistic benchmark to determine the appropriate sizes, locations, and operating schedules of the proposed ESSs, taking into account the different sources of uncertainty in the system. In the second solution, the author proposes a novel bilayer (AC-DC) architecture for residential distribution systems. With the proposed architecture, the distribution system becomes a bilayer system composed of the traditional AC layer for interfacing with existing system loads, plus an embedded DC layer for interfacing with PV arrays and PHEVs. A centralized bidirectional converter links the two layers and controls the power flow between them. The proposed solution offers a reasonable compromise that enables existing networks to benefit from both AC and DC electricity, thus metaphorically enjoying the best of both worlds. As with the first solution, the uncertainties that characterize the distribution system also create obstacles to the implementation of the proposed architecture. Another important contribution of the research presented in this thesis is the design and validation of the proposed bilayer system, with consideration of these different uncertainties. Finally, the author compares the strengths and weaknesses of both solutions to determine the better alternative.