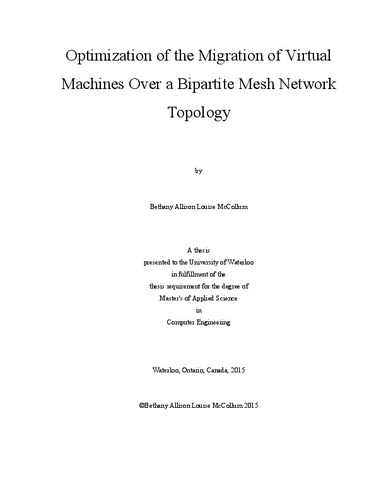 In today's society, the core network is becoming increasingly important to provide support for the ever growing number of end users as well as the applications that are required to run. While network technology continues to evolve, new topologies are formed to help optimize traffic and communication. One such topology is a bipartite mesh topology, a partial mesh which allows for a two hop distance for any source-destination pair with normal operation. Another trend that requires a good backend network is the act of virtualization, or creating virtual machines to run on configured hosts. One of the key aspects of the virtualization technology is the migration of virtual machines, moving them from one host to another via the network to increase performance or ease resource usage. Migration is a complicated procedure which has to be done quickly to avoid down time, so seeking ways to decrease this time of transfer is important. In today's environments, migration is only done by considering the hosts that it can move to and does not take the network into account. A way to help optimize the migration of virtual machines, especially over a bipartite mesh network, is to take the network state into account and to help minimize the congestion and the traffic on the network created by the migration. This thesis explores the background and technical workings of virtual machines as of present day and debates the concept of 'cold' migration against the concept of 'live' migration, putting it into perspective of the network and how exactly these migrations are accomplished. This thesis also explores the bipartite mesh network and its operation, including how it should be operated efficiently. Every network is subject to link failures, however with this type of network, the number of failed links must be bounded to the number of spine switches in the topology, which also bounds the maximum number of hops from a source to a destination, though reaching the bound for failed links does not necessarily imply that the maximum number of hops will be reached. Utilizing these bounds and the information gleamed from the virtualization, the primary question of how to optimize the migration of virtual machines over this bipartite mesh topology is formed and examined. These solutions involve a 'network first' approach which examines the state of the network, finds the shortest path destination and only then looks at the resources on the host to determine whether the destination can accept the virtual machine being transferred, and a 'hypervisor first' approach which chooses a destination based on host resources and only then considers the network state and how far the destination is logically from the source. Both solutions have merits and drawbacks, and they are examined; the network first approach is more complicated from a development point of view and requires more back and forth traffic over the network but provides the best optimization in terms of transfer time for the migrating virtual machine, while the hypervisor first approach does not guarantee the best optimization, operating on a threshold of whether the destination is within acceptable parameters. This threshold can easily be seen as the number of spine nodes + 1 and as such, requires little to no computation or communication over the network, unlike the network first approach. These solutions can be fully realized utilizing the OpenStack cloud suite, which, as an open source alternative to virtual machine managers from Microsoft or VMWare, can be modified to do extensive testing on these solutions to determine what is more feasible.