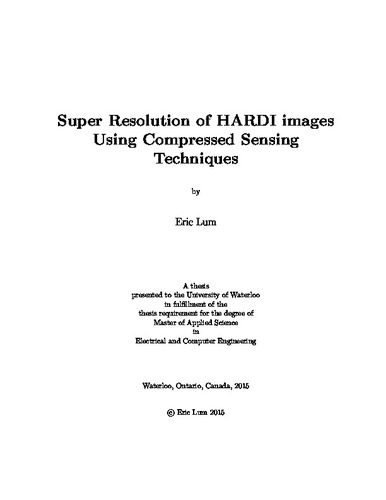 Effective techniques of inferring the condition of neural tracts in the brain is invaluable for clinicians and researchers towards investigation of neurological disorders in patients. It was not until the advent of diffusion Magnetic Resonance Imaging (dMRI), a noninvasive imaging method used to detect the diffusion of water molecules, that scientists have been able to assess the characteristics of cerebral diffusion in vivo. Among different dMRI methods, High Angular Resolution Diffusion Imaging (HARDI) is well known for striking a balance between ability to distinguish crossing neural fibre tracts while requiring a modest number of diffusion measurements (which is directly related to acquisition time). HARDI data provides insight into the directional properties of water diffusion in cerebral matter as a function of spatial coordinates. Ideally, one would be interested in having this information available at fine spatial resolution while minimizing the probing along different spatial orientations (so as to minimize the acquisition time). Unfortunately, availability of such datasets in reasonable acquisition times are hindered by limitations in current hardware and scanner protocols. On the other hand, post processing techniques prove promising in increasing the effective spatial resolution, allowing more detailed depictions of cerebral matter, while keeping the number of diffusion measurements within a feasible range. In light of the preceding developments, the main purpose of this research is to look into super resolution of HARDI data, using the modern theory of compressed sensing. The method proposed in this thesis allows an accurate approximation of HARDI signals at a higher spatial resolution compared to data obtained with a typical scanner. At the same time, ideas for reducing the number of diffusion measurements in the angular domain to improve the acquisition time are explored. Accordingly, the novel method of applying two distinct compressed sensing approaches in both spatial and angular domain, and combining them into a single framework for performing super resolution forms the main contribution provided by this thesis.