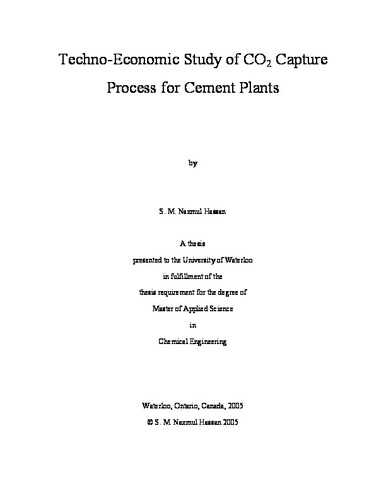 Carbon dioxide is considered to be the major source of GHG responsible for global warming; man-made CO<sub>2</sub> contributes approximately 63. 5% to all greenhouse gases. The cement industry is responsible for approximately 5% of global anthropogenic carbon dioxide emissions emitting nearly 900 kg of CO<sub>2</sub> for every 1000 kg of cement produced! Amine absorption processes in particular the monoethanolamine (MEA) based process, is considered to be a viable technology for capturing CO<sub>2</sub> from low-pressure flue gas streams because of its fast reaction rate with CO<sub>2</sub> and low cost of raw materials compared to other amines. However, MEA absorption process is associated with high capital and operating costs because a significant amount of energy is required for solvent regeneration and severe operating problems such as corrosion, solvent loss and solvent degradation. This research was motivated by the need to design size and cost analysis of CO<sub>2</sub> capture process from cement industry. MEA based absorption process was used as a potential technique to model CO<sub>2</sub> capture from cement plants. In this research four cases were considered all to reach a CO<sub>2</sub> purity of 98% i) the plant operates at the highest capacity ii) the plant operates at average load iii) the plant operates at minimum operating capacity and iv) switching to a lower carbon content fuel at average plant load. A comparison among four cases were performed to determine the best operating conditions for capturing CO<sub>2</sub> from cement plants. A sensitivity analysis of the economics to the lean loading and percent recovery were carried out as well as the different absorber and striper tray combinations.