Responses to Youth Crime in Canada: An Examination of the Micro and Macro Processes Associated with the Tough-on-Crime Legislation 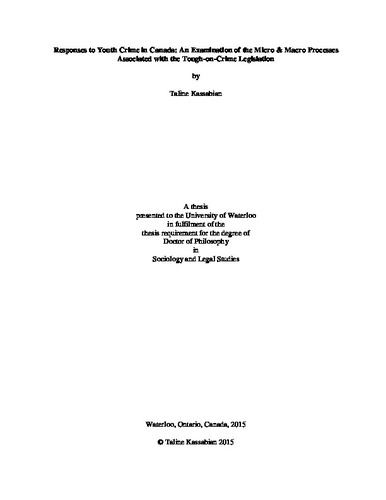 The enactment of tough-on-crime legislation in Canada is questionable given the abundance of research rejecting its underlying premises and goals. While there appears to be ongoing concern in Canada about the tough-on-crime agenda, there is currently a shortfall in information addressing the processes through which Bill C-10 (Part 4) was developed and legislated by the Conservative Government. As such, there is limited data that informs Canadians about the ways in which politicians make meaningful decisions about youth crime policy and legislation. Consequently, the objective of this dissertation is to provide a better understanding of the individual (micro) and governmental (macro) processes associated with the tough-on-crime approach in Canada, with a specific focus on responses to youth crime. Using a conflict and Marxist/critical perspective (Alvi, 2012; Chambliss & Seidman, 1971; DeKeseredy, 2011; Garland, 2001; Habermas, 1973, 1985; Hall et al., 2013; Quinney, 1970), this dissertation examines the state as a legitimate power and the ways in which it gains and maintains legitimacy. Theorists suggest modern laws work as an instrument of power to reflect the dominant ideology that is reproduced within the social structural system. Thus, this dissertation specifically examines the claim that laws are shaped by a consensus of dominant interests and values that are embodied and preserved in the tough-on-crime legislation, and is ultimately supported by the public. This research investigates three central questions: First, what are the processes through which Bill C-10 (Part 4) developed and was legislated? Second, in what way(s) has tough-on-crime legislation been implemented in Canadian youth courts? Finally, how does Texas (United States) differ in their response to youth crime, relative to their model of crime control and placement on the tough-on-crime spectrum? To examine the tough-on-crime approach, interviews were conducted with twenty-two participants who were either involved in the political debates of Bill C-10 (Part 4) or had intimate knowledge of the youth justice system. The interview data were cross-referenced and compared to the applicable parliamentary records in Hansard. Second, a case law analysis was conducted to determine how the tough-on-crime mandate has been implemented within Canadian youth courts (2003-2013). Finally, an analysis of case law in Texas was carried out in order to understand how more punitive jurisdictions respond to youth crime and how their legislation differs from Canada (1996-2013). The findings suggest the enactment of the tough-on-crime legislation in Canada was a result of a complex interaction between a number of agencies, institutions, and individuals after the Conservative’s won a majority government in 2011. Moreover, the findings demonstrate the values embodied within the tough-on-crime legislation reflect the dominant (conservative) ideology and served as a means of maintaining legitimacy (Habermas, 1985; Hall et al., 2013). While the Canadian case law did not indicate that youth in conflict with the law were more adversely affected by Bill C-10 (Part 4), there was no evidence to suggest that future substantive changes in practice would not occur. However, marginalized Canadian youth were noted as most likely to be subject to tough-on-crime measures (Alvi, 2012). The results from the case law analysis of Texas suggest the state focuses on diversion and rehabilitation, but to a lesser degree than Canada. This is largely due to Texas’ transfer laws or ability to impose a determinate sentence. As a result, there appears to be a disproportionate use of the tough-on-crime legislation in Texas, often affecting minority youth. These findings are not only illustrative of a more punitive model of crime control relative to Canada, but point to the potential dangers of enacting tough-on-crime policies. Overall, the implication of the findings from both jurisdictions is that the tough on-crime movement is a way of deflecting unspecified social problems onto youth as marginal political subjects, in an effort to mobilize the political power of the state (Alvi, 2012; DeKeseredy, 2011; Garland, 2001; Hall et al., 2013). In the Canadian context, there is evidence to suggest the state employed both “adaptive” and “non-adaptive” strategies to address the problem of youth crime (Garland, 1996). In effect, the newly enacted tough-on-crime legislation moves Canada further away from a reliance on various collaborative techniques and community based programs, and therefore supports a strong state-centric approach to crime control.

Taline Kassabian (2015). Responses to Youth Crime in Canada: An Examination of the Micro and Macro Processes Associated with the Tough-on-Crime Legislation. UWSpace. http://hdl.handle.net/10012/9248