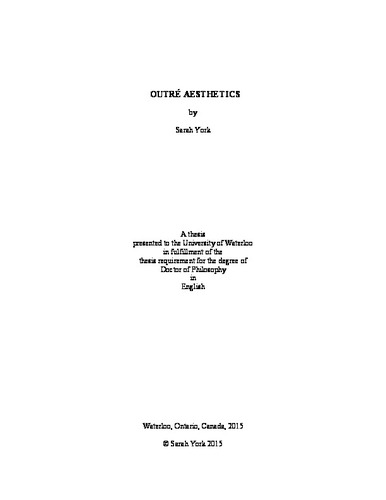 Since the revolutionary period in America, aesthetics has played a crucial role in political formation, social improvisation, and cultural imagination. Aesthetic contemplation offered a rich and evocative language for imagining political liberty, and for dealing with the inherent contradictions and challenges of a new democracy. At the same time, many Americans held substantially disparate concepts, values, and tastes. They offered alternative visions and ‘outside’ aesthetic expressions that continued through the nineteenth and twentieth centuries, and into the present. Outré aesthetic varieties testify to the tremendous diversity in American life, people, and art. Outré aesthetics connects corporeal and emotive responses to art and material appearances with the non-normative systems and disruptive forms that define them. I employ the outré as both an analytical concept and critical tool for understanding embodied approaches to aesthetic experience, with historical, cultural, artistic and literary examples. I bring together recent critical treatments of aesthetics across disciplines into conversation, including cultural studies, literature, philosophy, history, psychology, disability and freak studies, bio/neuro/cognitive and social aesthetics, and expand on recent claims. The dissertation attempts to contribute to revisionist American Studies by asserting an aesthetics that questions the distinction between aesthetic function and life, and examines both the significance and ubiquity of the outré in the relationship between politics and aesthetics in American culture.