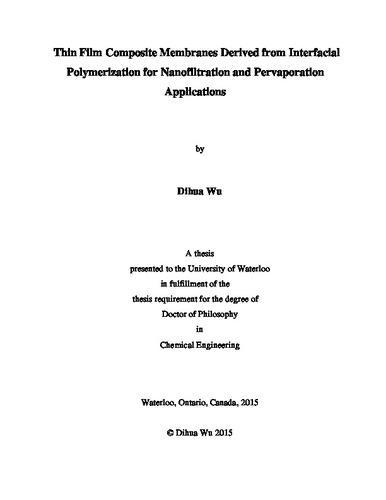 In this study, thin film composite (TFC) membranes were prepared by interfacial polymerization on a microporous polyethersulfone (PES) substrate. These membranes were studied for salt separation by nanofiltration and ethylene glycol dehydration by pervaporation. The membranes with a layer-by-layer structure based on polyethylenimine (PEI) and trimesoylchloride (TMC) were prepared by sequential reactant depositions and reactions. The membrane properties can be tailored by controlling the number and sequence of the reactant depositions. In general, the PEI-TMC membranes were more permeable than the TMC-PEI membranes. The membrane formed by a single cycle of interfacial polymerization with 3.5 wt% PEI and 0.7 wt% TMC had a positively charged surface and showed a good nanofiltration performance; salt rejections of 95.1% for MgCl2, 94.4% for MgSO4, 80.5% for Na2SO4 and 85.1% for NaCl with a pure water permeation flux of 24.5 L/(m2.h) were obtained at a feed solute concentration of 500 ppm and transmembrane pressure of 0.8 MPa gauge. In another approach, monomeric amine piperazine (PIP) was embedded into the polymeric amine PEI as the amine reactant. Membranes with a single-ply polyamide layer were produced by reacting TMC with mixed amines of PEI and PIP. Incorporation of 10 wt% PIP in PEI resulted in a 6-fold increase in permeation flux while still maintaining a 91.6% MgCl2 rejection. In addition, 2-ply polyamide membranes were prepared by two cycles of PEI-TMC and PIP-TMC interfacial reactions, separately. It was demonstrated that by properly controlling the PIP/PEI concentration ratio, the 2-ply polyamide membranes with both a higher permeation flux and salt rejection than conventional single-ply polyamide membranes could be produced. The effects of chlorine exposure on the nanofiltration performance of the positively-charged polyamide membranes were studied. It was found that the PIP/TMC crosslinks on the outer sublayer improved the chlorine resistance of the membrane. Controlled exposure of the membrane to a low chlorine concentration could improve the nanofiltration performance. The effect of membrane chlorination was intensified at either an alkaline or acidic pH. The customarily used chlorination intensity (ppm.h), which is a composite parameter based on the product of chlorine concentration and chlorination time, was not adequate for use as a standalone parameter to characterize the chlorination conditions. The PEI/TMC nanofiltration membrane was further modified with self-polymerized polydopamine for use in dehydration of ethylene glycol by pervaporation. Deposition of polydopamine either as an outer layer (i.e., on top of the polyamide) or as a transition layer (i.e., between the polyamide and the substrate) would increase the total permeation flux and effectively improve the membrane selectivity. The modified membrane showed a total permeation flux of 81.03 g/(m2.h) and a separation factor of 388 for a feed containing 2.4 wt% water at 38 °C. The presence of inorganic salt NaCl in the feed mixture decreased the permeation fluxes of both water and ethylene glycol, but increased the water content in the permeate.