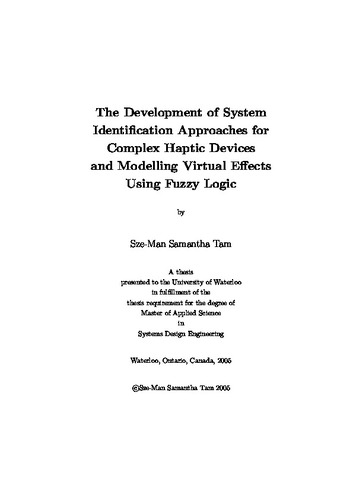 Haptic applications often employ devices with many degrees of freedom in order to allow the user to have natural movement during human-machine interaction. From the development point of view, the complexity in mechanical dynamics imposes a lot of challenges in modelling the behaviour of the device. Traditional system identification methods for nonlinear systems are often computationally expensive. Moreover, current research on using neural network approaches disconnect the physical device dynamics with the identification process. This thesis proposes a different approach to system identification of complex haptic devices when analytical models are formulated. It organizes the unknowns to be identified based on the governing dynamic equations of the device and reduces the cost of computation. All the experimental work is done with the Freedom 6S, a haptic device with input and feedback in positions and velocities for all 6 degrees of freedom . <br /><br /> Once a symbolic model is developed, a subset of the overall dynamic equations describing selected joint(s) of the haptic robot can be obtained. The advantage of being able to describe the selected joint(s) is that when other non-selected joints are physically fixed or locked up, it mathematically simplifies the subset dynamic equation. Hence, a reduced set of unknowns (e. g. mass, centroid location, inertia, friction, etc) resulting from the simplified subset equation describes the dynamic of the selected joint(s) at a given mechanical orientation of the robot. By studying the subset equations describing the joints, a locking sequence of joints can be determined to minimize the number of unknowns to be determined at a time. All the unknowns of the system can be systematically determined by locking selected joint(s) of the device following this locking sequence. Two system identification methods are proposed: Method of Isolated Joint and Method of Coupling Joints. Simulation results confirm that the latter approach is able to successfully identify the system unknowns of Freedom 6S. Both open-loop experimental tests and close-loop verification comparison between the measured and simulated results are presented. <br /><br /> Once the haptic device is modelled, fuzzy logic is used to address chattering phenomenon common to strong virtual effects. In this work, a virtual wall is used to demonstrate this approach. The fuzzy controller design is discussed and experimental comparison between the performance of using a proportional-derivative gain controller and the designed fuzzy controller is presented. The fuzzy controller is able to outperform the traditional controller, eliminating the need for hardware upgrades for improved haptic performance. Summary of results and conclusions are included along with suggested future work to be done.