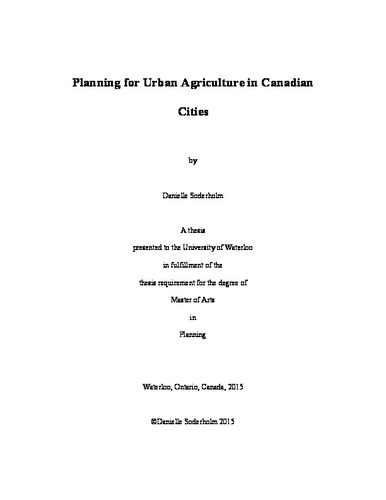 As issues regarding food security have become more prevalent in the developed world, the popularity of methods to combat these issues, such as urban agriculture (UA), have risen. In this environment, municipal decision-makers and planners have started to make food and urban agriculture a priority. This thesis contributes to that end by exploring how planning tools, policies and regulations have an effect on urban agriculture in Canada. An inventory of urban agriculture activities was created for large and mid-sized cities across Canada to determine the prevalence and location of activity types. Ten cities with the highest and most varied types of UA were chosen for more in-depth case study exploration. A policy scan and semi-structured interviews with planners were conducted for each of the case study municipalities to determine if planning had contributed to the success of UA in their community. The results of the inventory revealed fourteen different types of urban agriculture present across Canada, with community gardens being the most popular. In terms of geographic distribution, the majority of UA activity is concentrated on the east and west coasts. Large cities tend to have not only a wider variety of UA, but also more urban agriculture per capita than mid-sized cities. Of the planning tools examined, case study results indicate that zoning and by-laws have the most biggest impact on UA. Although many of the case study cities incorporate food or UA in their municipal plans, these were generally not seen as having much of an effect. Factors outside of planning such as local food history and context, a “green ethic”, interest in getting back to the land, and the support of key individuals were shown to have a larger influence on the prevalence of UA. Recommendations for planners that want to have a greater influence on UA include ensuring that zoning and by-laws are permissive; incorporating food and UA into official plans; monitoring indicators related to UA; having public engagement strategies that are specifically targeted to issues of food and urban agriculture; and cultivating a close relationship with the local food policy council.