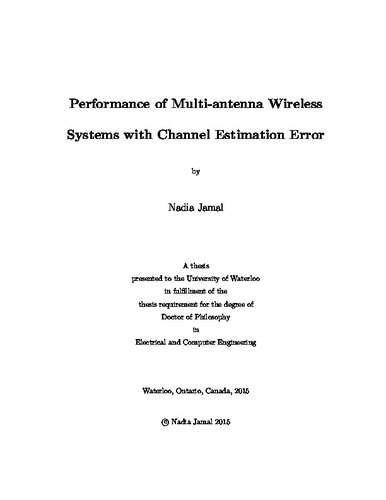 Wireless services and applications have become extremely popular and widely employed over the past decades. This, in turn, has led to a dramatic increase in the number of wireless users who demand reliable services with high data rates. But such services are very challenging to provide due to radio channel impairments including multipath fading and co-channel interference. In this regard, the use of multiple antennas in wireless systems was proposed recently which has rapidly received great attention. Multi-antenna technology is shown to have powerful capabilities to improve reliability via spatial diversity and to increase data rates via spatial multiplexing as compared with traditional single-antenna systems. Furthermore, by exploiting additional spatial dimensions, transmit beamforming techniques can be used to manage co-channel interference in such systems. In a rich scattering environment, multiple antennas that are located sufficiently far apart at a transmitter experience independent fading with high probability. Therefore, the transmitter can send redundant versions of the same data stream over these independent channels to improve reliability. In particular, if the transmitter has access to perfect channel state information (CSI), it can set the beamforming weights such that the received signals from different transmit antennas combine constructively at some intended receiver(s) and destructively at some unintended receiver(s) so that no co-channel interference is generated. Spatial multiplexing is another powerful multi-antenna transmission technique which aids in enhancing data rates without increasing bandwidth or transmit power. Multiple parallel and independent channels can be established between a transmitter and a receiver that both use multiple antennas in a rich scattering environment. Therefore, multiple independent streams of data can be simultaneously sent over these channels within the bandwidth of operation. This, in turn, enhances the data rate by a multiplicative factor equal to the number of the independent streams. Water-filling is a strategy that achieves the maximum data rate in such multiple-input multiple-output (MIMO) systems when perfect CSI is available at both the transmitter and the receiver. In practice, CSI can be obtained at the receiver by the use of training sequences and its accuracy can be increased by carefully selecting sequences with good auto-correlation properties. The transmitter can acquire CSI by using the channel reciprocity principle in wireless systems or by relying on a feedback path to convey the CSI from the receiver. Due to practical limitations such as rate-limited feedback links and the delay involved in such procedures, perfect CSI can be very challenging to obtain at the transmitter side. This motivates the need to evaluate the effect of imperfect CSI at the transmitter (CSIT) on the performance of transmit diversity and beamforming in multiple-input single-output (MISO) systems and water-filling power allocation in MIMO systems. In this thesis, transmit diversity and beamforming are studied in a MISO system with an n-antenna transmitter, an intended single-antenna receiver, and some unintended single- antenna receivers. Two scenarios are considered, namely, null-steering beamforming and ε-threshold beamforming in which the allowable interference threshold at the unintended receivers is zero and ε > 0, respectively. With perfect CSIT, null-steering beamforming can successfully nullify interference at m unintended receivers, where m < n, and achieve a nonzero received power at the intended receiver with a mean value that grows linearly with n − m and is directly proportional to the power of the line-of-sight component between the transmitter and the intended receiver. With imperfect CSIT, null-steering beamforming based on erroneous channel estimates results in a nonzero interference at the unintended receivers with a mean value that is interestingly independent of n. Also, it is shown that a moderate line-of-sight component can significantly reduce the effect of estimation error on the performance of the intended link. Intuitively, the allowance of a small nonzero interference at the unintended receivers, as in ε-threshold beamforming, should improve the received power at the intended receiver. The analysis in this thesis shows that this enhancement is marginal and not worthwhile, notably in the case of imperfect CSIT. Therefore, there is no significant loss in the perfor- mance of the intended link if the transmitter performs null-steering beamforming instead. In fact, the transmitter can employ additional antennas to improve the performance of the intended link without generating significant extra interference on the unintended receivers. Furthermore, in this thesis, the effect of channel estimation error on the performance of water-filling power allocation in a MIMO system is explored when the transmitter and the receiver both have n antennas. At low signal to noise ratios (SNR), the gap be- tween water-filling throughput with perfect CSIT and the throughput corresponding to equal-power allocation with no CSIT is large asymptotically. It is thus interesting and worthwhile to evaluate how water-filling based on erroneous channel estimates may result in a throughput that falls between these two extremes. In this regard, it is first shown that, at low SNR, the normalized (by 1/n) water-filling throughput with imperfect CSIT converges to a non-random value denoted by R, almost surely as n increases. Denoting CP as the asymptotic normalized water-filling throughput with perfect CSIT and using it as a baseline for comparison, we then compare R with CP and find that for moderate channel estimation errors, water-filling can still achieve significant normalized throughputs that are close to CP. Furthermore, when the quality of channel estimation is very low, water-filling is shown asymptotically to achieve the same throughput as equal power allocation in the low SNR regime.