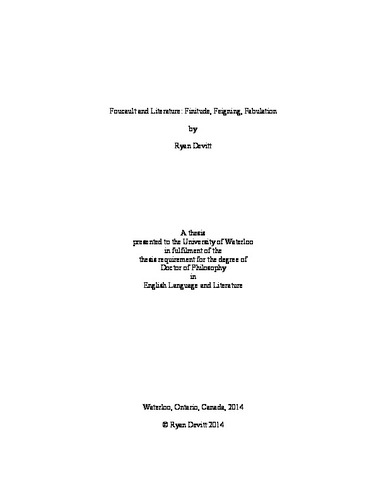 The dissertation is composed of two related parts, each applying aspects of Michel Foucault's thought to contemporary American avant-garde writing. Part One brings together Foucault's neglected early essays on literature, reading them against the backdrop of the major works published during this period (1961-1966) and deducing from them a method and framework of interpretation, which I call feigning. Feigning, in turn, reveals the themes common to Foucault's early work: finitude as a strict limit, the sovereignty of language as proof of this limit, and repetition as 1) the proof of sovereignty, but also 2) the form of an incredible experience that disrupts the origin, calls being into question, and requires a complete openness to the "irreducible enigma the world conceals" (Legros 111). Feigning as such is applied to contemporary works of American "fabulation" by Robert Coover, John Barth, and Donald Barthelme. My reading of these authors demonstrates the reach and relevance of feigning as a rich, complex method of interpretation that is not limited to the French avant-garde of the mid-twentieth century. Part Two of the dissertation reevaluates the method of feigning according to Foucault's return to art and writing in his final work. Here, literature functions not simply as an "experience of the outside" that casts everything in doubt, but serves instead as equipment and aid in the critical, careful assessment of the formation of self. Renewing the themes of Part One and drawing on the pure research of Foucault's final lectures, I argue for the potential of feigning as an "art of life" that bears upon the cultivation of attitude and ēthos.