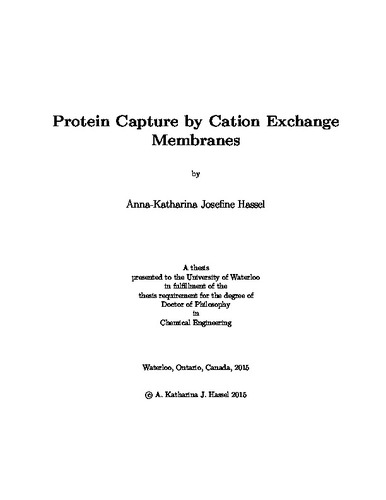 Monoclonal antibodies (mAbs) are large recombinant proteins produced in CHO (Chinese hamster ovary) cell culture with a multiplicity of applications such as ligands for affinity chromatography material, medical applications for disabling toxins and especially as cancer therapeutics. They have the prospect of novel mechanisms for improved tumor targeting in local therapeutic applications. The “bottleneck” in mAb supply lies not with their production but in their purification. Hence new mAb purification operations are necessary due to the complexity in their purification and the significant cost of antibody downstream procedures which can represent up to 80% of the total production cost. The predominant mAb purification process relies on a series of resin chromatography steps with Protein-A affinity chromatography as the initial capture step. Protein-A resins display an excellent specificity for mAbs but are extremely costly, limited by pore diffusion mass transfer and may lead to leaching of the Protein-A ligand in the eluted product stream. To overcome these issues, alternative strategies without Protein-A or resin chromatography, are being investigated to achieve similar or improve mAb recovery. This PhD project investigated the potential of a weak cation exchange macroporous hydrogel membrane material developed by NATRIX Separations for model protein capture as first step towards mAb purification. The weak cation exchange material consists of a polymeric matrix and functionalized groups which display different charge characteristics according to ionic strength or pH. The project was divided in three overall objectives: In a first part a variety of model proteins and antibodies were characterized for their hydrophobic character with a fluorescence probe. Secondly, the membrane was characterized, to contribute new knowledge for this novel weak cation exchange membrane such as its swelling behaviour, surface charge, ion exchange capacity and average pore size. Lastly, the interaction between membrane and proteins was investigated. Static and dynamic conditions as well as membranes in different formats were characterized for their binding behaviour and mass transfer limitations present in the material with model proteins lysozyme and IgG. This work shows a promising avenue towards a simpler, cheaper and faster purification process with high protein capture and yield, addressing the downstream bottleneck for many proteins especially mAbs and make the successful cancer drug accessible for a broader audience of patients.