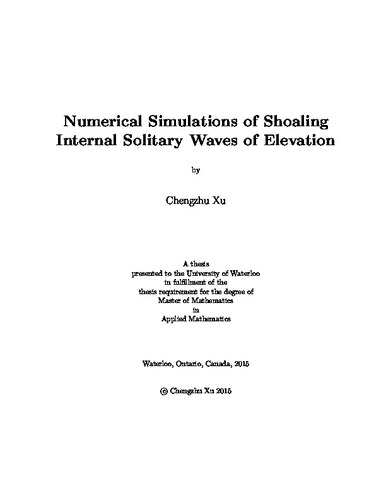 We present high-resolution, two- and three-dimensional direct numerical simulations of laboratory-scale, fully nonlinear internal solitary waves of elevation shoaling onto and over a small-amplitude shelf. The three-dimensional, mapped coordinate, spectral collocation method used for the simulations allows for accurate modelling of both the shoaling waves and the bottom boundary layer. We focus on wave-induced instabilities during the shoaling and de-shoaling processes. The shoaling of the waves is characterized by the formation of a quasi-trapped core which undergoes a spatially growing stratified shear instability at its edge and a lobe-cleft instability in its nose. Both of these instabilities develop and three-dimensionalize concurrently, leading to strong bottom shear stress. During the de-shoaling process, the core breaks up and ejects fluid that forms a vortex-rich region near the down-sloping portion of the shelf. The flow in this region is highly turbulent and the bottom shear stress is extremely strong. Experiments with a corrugated bottom boundary are also performed. Boundary layer separation is found inside each of the corrugations during the wave’s shoaling process. Our analyses suggest that all of these wave-induced instabilities can lead to enhanced turbulence in the water column and increased shear stress on the bottom boundary. Through the generation and evolution of these instabilities, the shoaling and de-shoaling cycles of internal solitary waves of elevation are likely to provide systematic mechanisms for material mixing and sediment resuspension. These mechanisms have significant environmental implications on the near-coastal regions of the world’s oceans.