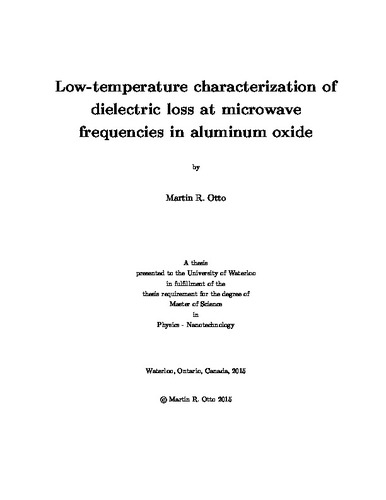 Superconducting quantum devices have gained increasing interest over the past 15 years because of their role as promising candidates for implementing a large-scale quantum computer and as ultra-sensitive detectors. Superconducting resonators are one type of superconducting device which are used in a variety of applications including quantum computing and radioastronomy. They can achieve large quality factors which are important for these applications and a variety of others. Specific examples of these applications include the readout and coupling of superconducting qubits and also microwave kinetic inductance detector arrays for sub-mm wavelength astronomical measurements. High quality factors also enable the study of very subtle features in the electromagnetic response of the resonator. This feature in turn offers provides a method to characterize loss mechanisms which affect the performance of superconducting qubits, by measuring the quality factor of a resonator. Dielectric loss is an example of such a loss mechanism, and is considered to be one of, if not \it the \rm major obstacle to overcome in order to construct scalable quantum technologies based on superconducting devices. This type of loss arises from the coupling of the electric field in the device to spurious degrees of freedom which arise naturally the dielectric environment of the device. The fast-growing interest in the physics and applications of superconducting resonators has renewed interest in an improving our fundamental understanding of dielectric loss. This interest involves the study of a much bigger and older question in condensed matter physics; namely, what is the microscopic physics which governs the behaviour and of an amorphous material at low-temperatures? In this thesis, we present a systematic study of dielectric loss in amorphous aluminum oxide using superconducting microwave resonators. Measurements of the intrinsic loss tangent over a large temperature range of 40~mK to 1~K are presented and analyzed in detail. Some aspects of the data are well understood in terms of the standard tunnelling two-level system model, while others require a deeper analysis of the electrodynamics of the resonator and insights from more advanced theories. We employ a consistent approach using numerical simulations of the resonator to understand loss mechanisms arising from both an inhomogeneous electric field and multiple dielectric layers. We measure saturation effects which provide insight into coherent properties of two-level system ensembles and the mutual interaction between them. Excellent agreement with the two-level system model is found for intrinsic losses, however the strong dependence on temperature which we observe for saturation effects is not predicted in the standard form of the model. We find that this dependence can be understood in terms of the theory of spectral diffusion which is consistent with a strong mutual interaction between two-level systems contributes to broadening of their spectral linewidths.